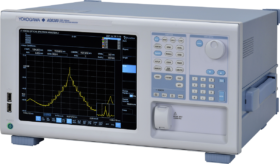 Yokogawa Test & Measurement Corporation has debuted its AQ6380 optical spectrum analyser (OSA), which is designed for researchers and developers who undertake optical spectrum measurements and require high wavelength resolution. The unit has a wide dynamic range in optical communication wavelength bands between 1200 nanometre (nm) and 1650 nm. Yokogawa says the benchtop analyser, which uses dispersion spectroscopy, is the first instrument of its type in the industry to achieve a wavelength resolution of 5 picometres (pm).

Kelvin Hagebeuk, Yokogawa’s Marketing Manager – Test and Measurement, told Optical Connections that following discussion with its customers, Yokogawa developed the AQ 6380 Optical Spectrum Analyser, which offers the optical performance required by engineers and scientists to develop and improve the speed, bandwidth and quality of next generation optical communication networks, including WDM, IoT, cloud computing and 5G.

He said, “Answering these development goals, the AQ 6380 comes with a set of features adding value to the three key areas of performance, productivity and expertise. It offers excellent optical wavelength resolution accuracy and closing dynamic range, to allow signals that are in close proximity to be clearly separated and accurately measured. It also features smart technologies and functionality such as an intuitive touch screen, automated wavelength calibration, optimised sweep speed and dedicated application setup menus.”

The AQ6380 is also equipped with a function that suppresses the absorption of light of a specific wavelength by removing the minute amount of water vapor from the air inside the monochromator. This enables measurement of the original optical spectrum of the light being measured.

Hagebeuk explained, “The optical input user PC type, single mode fibre input achieves a light reflection attenuation of 30db or more, even when a PC type optical plug is connected. This reduces the impact on measurements of reflection-sensitive optical devices. The presence of water vapour inside the instrument can absorb light in certain specific regions of the light spectrum, and such natural absorptions can lead to inaccurate measurement results. Models covering that wavelength range like the AQ6380 are equipped with the air purging feature. Continuous circulation of pure purge gas such as nitrogen or dry air through the ports of the back panel reduces the water vapour inside the monochromator, allowing the true optical spectrum to be measured. It’s an option that customers can use if they have this specific application.”

Yokogawa has also added a new feature to the application menu that simplifies measurement setup, as it opens a guide-through wizard for setting up specific measurements and analysis via the app button. The touch screen display shows the available testing apps, including WDM DFB-LD,  FP-LD or LED testing.

Hagebeuk added, “In the future, new or additional testing applications will be made available for download from the Yokogawa website and can be added to the AQ6380 by firmware update. So if customers want a particular functionality as a standard application, it can be uploaded later via a web update.”