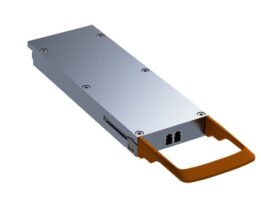 Acacia says the Jannu DSP is designed to offer network operators the ability to maximise transmission data rate across a wide range of multi-haul network applications including DCI, metro, long-haul and subsea. “By leveraging the latest 5nm CMOS process node and our advanced signal processing algorithms, we’re delivering exceptional performance with less than half the power per bit of competing solutions, enabling a pluggable deployment model,” says Christian Rasmussen, Sr. director, DSP and Optics Engineering and founder at Acacia.

“Historically, Acacia has been a ground-breaker in advancing coherent technology, and the company continues to demonstrate a long-term vision for how multi-haul coherent optics should evolve over time.” said Dr. Scott Wilkinson, lead analyst for Optical Components at Cignal AI. “Acacia’s new Coherent Interconnect Module is a great example of market leadership. This solution is a logical next step following the widely adopted Pico DSP-based products and will provide pluggability that is attractive to both traditional and cloud operators.”

Tom Williams, vice president of marketing at Acacia, explained that this eight-generation module, while being slightly larger than the standard CFP2 pluggable, is the result of a long process and strategic decisions on how market demand will develop.  He said, “I think a lot of the use cases will be migrating by doubling the baud rate to go from 400 gig to 800 gig data rates. How to think of coherent technology and its evolution over time is that in the early days of coherent, solutions were in the 30 to 34 gigabaud range, generally known as Class 1. There were also 100 gig solutions initially, and then 200 gig which were pluggable and embedded solutions. A lot of investment went into 30 to 34 gigabaud OIF standardised components, including strong investment by Acacia.”

He continued, “Today, everybody’s at this Class 2 component level which is 60 to 68 gigabaud. This is where you see all these ZR and ZR+ products coming in, along with our AC1200 multi-haul module. We use the same photonics and basic components for AC1200 that we use for ZR and Open ZR+. Going to the next generation, we see the same sort of thing where we’ll double everything, going to 120 to 136 gigabaud. We already see the next-generation standards starting to form in terms of 800 ZR and Open ROADMs, with a focus on doubling the baud rate. The Jannu solution follows that same sort of investment area using silicon photonics. So what’s fundamental to our roadmap strategy is that we do these big investments, and we leverage the silicon photonics across all of our products.”

Williams added that Acacia was currently sharing prototypes of the module with its lead customers and expected to have full customer integration in 2022 and commercial availability in 2023.