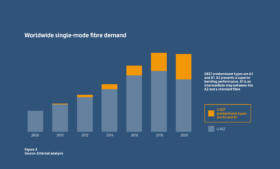 According to the latest Industry Insight from Prysmian, operators should look to implement a solution that can help safely transmit optical signals and cope with the higher bit rates and wavelength operations that next-generation FTTH systems will bring. The company says that as security of data transfer remains critically important, global operators must seek to deploy secure optical links to deter potential threats from hackers.

Prysmian says that while most organisations use encryption technology based on databases, data centres, storage arrays, or hard drives to provide full protection while the data is at rest, it is when this data leaves the premises and is transmitted through the networks that it is most at risk of being compromised and intercepted. Maintaining complete end-to-end physical security of the links remains a key challenge for operators and as cables are easily accessible for hackers, they have become strategic targets. It is not as difficult as widely believed to compromise a fibre network link as hackers can easily purchase software tools to tap a fibre network and remain undetected.

The company adds that introducing in-flight encryption solutions to the optical systems transmitting and receiving the data will help to fully secure the network end-to-end. By leveraging optimized glass technology, Prysmian Group’s BendBright™XS G.657.A2 fibre secures all transmission routes from long-distance to access. Offering 100 times more bend resistance than G.652.D fibres when bent in a hacker’s tracking tool, BendBright™XS G.657.A2 fibre is deployed in networks around the world as it seamlessly provides added bend immunity and intrinsic traffic safety.

“As the industry continues to migrate to cloud-based services, and we see a notable surge in data exchanges and transmissions compounded by the global pandemic, it is critical that organisations leverage the most optimum solutions possible to prevent and counter these threats,” said Philippe Vanhille, EVP Telecom Business at Prysmian Group. “In an increasingly connected world, organisations must secure and protect their customers’ data, while it is both at rest and in flight, to prevent a loss of customer confidence. If left exposed and unprotected, they face a detrimental effect on company finances and reputation.”

Prysmian notes that ITU-T G.652.D single-mode fibres are intrinsically sensitive to bending effects. When bent, hackers can exploit this to tap transmitted signals and capitalise on this notable weakness. This is primarily achieved by hackers stealing sensitive customer data from optical fibre cables notably in joints and splicing cassettes, where the fibres are individually extracted to be spliced or routed.

Prysmian says its solution helps to facilitate the demanding cable designs that are required for increased density and a smaller footprint in both rural and urban environments. It is 100% compliant with the most stringent G.652.D recommendations, and is fully backward compatible and future-proof.