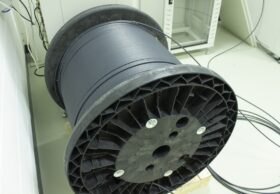 A recent demonstration of the ultimate reach performance of Lumenisity’s NANF® hollowcore cable suggests that there appears to be no fundamental limits to the technology’s data transmission distances, according to the company. The demonstration was carried out by the Politecnico di Torino university and the LINKS Foundation research group in their joint PhotoNext lab facility. Using the lab’s advanced testing set-up, some channels reached almost 6,000km.

Lumenisity says its CoreSmart® NANF® technology is robustly single-moded which provides continuous, uninterrupted, simultaneous single mode transmission at 1,310nm, as well as over the full C and L bands and beyond, offering the promise of realising loss values at, or better than, conventional solid silica core fibres. It adds that the results show that the development of NANF® technology has substantially reduced IMI. As the current loss (~1dB/km) is reduced to levels comparable to standard fibres in the near future, while maintaining the IMI shown in these experiments, NANF could become a promising alternative for higher-throughput long haul systems and networks.

Prof. Pierluigi Poggiolini, Coordinator of the OptCom Group of Politecnico di Torino, said, “NANF is one of the most exciting technologies currently on the optical landscape. We believed in it early on and started a close collaboration with the ORC at Southampton and now with Lumenisity too, to prove the potential of NANF in all segments of optical systems and networks. The results have been so far fantastic.”

Dr. Antonino Nespola, Head of the PhotoNext laboratory for the LINKS Foundation commented, “The transmission distance presented at this year’s OFC post-deadline session is more than six times longer than the previous record reported at OFC last year. At the current rate of improvement, the low loss and ultralow nonlinearity across very wide bandwidths could make NANF the trustable candidate for increasing the throughput and capacity of the next-generation optical systems”.

Prof. Francesco Poletti added, “Hollowcore technology has made giant steps in recent years. At an OFC post deadline session in 2013 we reported data transmission over 300 metres of photonic bandgap fibre. Fast forward eight years, change the technology to NANF and add invaluable collaborations with Lumenisity and the PhotoNext Lab, and multi-thousand kilometres become possible. There is more work still to be done, but the future looks bright for hollowcore fibres”.

Mike Fake, Lumenisity’s director responsible for Product Management, said, “These results in fibre are complementary to those we have reported this week in deployable cable formats and further underpins our confidence in the technology platform we are bringing to market for high-capacity networks with the promise of not only achieving this in the Metro Network today but also in long reach applications in the future.”

Earlier this week, Lumenisity® reported recirculating loop transmission in a field deployable cable of over 1,000km at 400 Gbps across the C band and well over 100km at 800 Gbps in collaboration with Ciena. More details on the PhotoNext lab experiment were due to be shared in the post-deadline paper session at OFC on Friday 11th June.