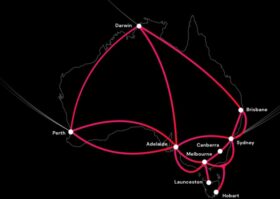 Australia looks set to get a 20,000km hyperscale national backbone which will support industries such as cloud computing, data centres, environmental sciences, space vehicle launch, aerospace, satellite, defence as well as provide transmission to local distribution networks such as the National Broadband Network and mobile operators. Dubbed HyperOne, the network is the vision of serial tech entrepreneur, Bevan Slattery , who says, “HyperOne is big, bold and way overdue. [It] will be the first true private national fibre backbone project connecting major data hubs in every capital city in every state and territory across Australia.

HyperOne will also create new major interconnection points for more international undersea cables into Australia from Asia and as far as the Americas and Antarctica.” He added, “With the current geopolitical instability in the region there is unprecedented opportunity for Australia to become the region’s leading, secure and stable hub for future industries and jobs.”

Federal Minister for Communications, Urban Infrastructure, Cities and the Arts, Paul Fletcher welcomed HyperOne’s announcement that it plans to make a very significant investment in a new backbone fibre optic transmission network across Australia. He said, “HyperOne’s planned network would deliver a major boost in data transmission capacity into many cities and towns across Australia, which in turn would open up new economic opportunities, support new industries and generate jobs.”

South Australian Premier, Steven Marshall said he was thrilled that South Australia was going to play a big part in the nation’s first hyperscale national fibre network. “HyperOne means jobs for South Australians,” Premier Marshall said. “Not only do we already have a huge contingent of high-tech companies working out of Lot Fourteen – we expect to see even more companies base their headquarters here to take advantage of Adelaide’s unique position in this new network. This iconic project supports my government’s strong economic plan to invest in new jobs in future industries including space, cybersecurity, defence and agritech.” “I thank Bevan Slattery for this massive investment in our State and having a vision that will see this project made by Australians for Australians,” added Premier Marshall.

Mr Slattery added, “HyperOne will be a new generation of hyperscaled network, capable of carrying over 10,000 terabits per second – more traffic than every other national backbone built in Australia’s history combined. The current networks have served Australia well for the past 20 years but they are nearing the end of their useful life and they were designed for a different time,” he said. He observed, “All the existing national transmission networks were built back when there was no Youtube, Netflix, social media, iPhones, or even cloud, let alone the future industries. They also didn’t address the digital divide in remote and regional Australia. That’s why we are adding more than 1,000 “on-ramps” in regional and remote Australia enabling underserved communities and remote areas a cost effective way to access HyperOne.”

Northern Territory Chief Minister, Michael Gunner, also welcomed the announcement of HyperOne saying it would underpin thousands of new jobs in the territory. “HyperOne will help cement the Territory’s position as Australia’s comeback capital, making Darwin the key point of digital interconnect between South East Asia, the fastest growing digital market on earth and Australia’s east coast,” Minister Gunner said. “We will be the digital entrance for the rest of Asia into Australia, and we are ready to roll out the red carpet. This will create jobs here in the Territory, as well as opening up considerable economic opportunities and encouraging digital investment in the Territory.”