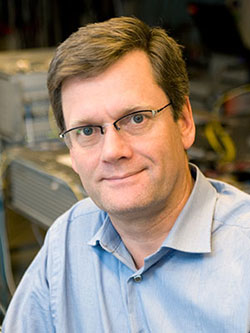 Researchers at Sweden’s Chalmers University of Technology have completed a five-year research project looking at how to make fibre optic communications systems more energy efficient. Among their proposals are: smart, error-correcting data chip circuits, which they refined to be multiple times less energy consumptive; at a systemic level, the use of optical frequency combs instead of having separate laser transmitters for each frequency channel; and  optimisation algorithms for managing datacentre traffic. The project has yielded multiple scientific articles, in publications including Nature Communications.

The researchers point out that streaming films and music, scrolling through social media, and using cloud-based storage services are everyday activities now. But to accommodate this digital lifestyle, a huge amount of data needs to be transmitted through fibre optic cables – and that amount is increasing at an almost unimaginable rate, consuming an enormous amount of electricity. This is completely unsustainable – at the current rate of increase, if no energy efficiency gains were made, within ten years the Internet alone would consume more electricity than is currently generated worldwide. The Chalmers team adds that the electricity production cannot be increased at the same rate without massively increasing the usage of fossil fuels for electricity generation, which of course would lead to a significant increase in carbon dioxide emissions.

“The challenge lies in meeting that inevitable demand for capacity and performance, while keeping costs at a reasonable level and minimising the environmental impacts,” said Peter Andrekson, Professor of Photonics at the Department of Microtechnology and Nanoscience at Chalmers (pictured).

In the early phase of the project, the Chalmers researchers identified the biggest energy drains in today’s fibre optic systems. With this knowledge, they then designed and built a concept for a system for data transmission which consumes as little energy as possible. Improving the performance of components of the system, operating against each other, results in significant energy savings.

Currently, some of the most energy-intensive components are error-correction data chips, which are used in optical systems to compensate for noise and interference. The Chalmers researchers have now succeeded in designing these chips with optimised circuits.

The new data chips were designed by Chalmers and manufactured in Grenoble in France. The Chalmers researchers subsequently verified the chips’ performance and measured the energy usage. At an energy transfer speed of 1 Tbps the researchers demonstrated that the chip drew less energy than 2 picojoules per bit. This equates to a power consumption of 2 W at this data rate. Comparatively, the current energy usage at such high transfer speeds is around 50 picojoules per bit, around 50 W.

In the case of optical frequency combs, these devices emit light at all wavelengths simultaneously, making the transmitter very frequency-stable. This makes reception of the signals much easier – and thus more energy efficient.

Energy savings can also be made through controlling fibre optic communications at the network level. By mathematically modelling the energy consumption in different network resources, data traffic can be controlled and directed so that the resources are utilised optimally. This is especially valuable if traffic varies over time, as is the case in most networks. For this, the researchers developed an optimisation algorithm which can reduce network energy consumption by up to 70%.