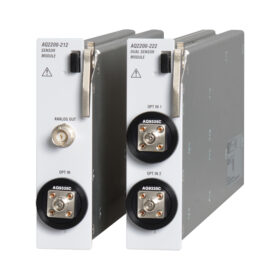 The new modules also have an improved uncertainty of ±2.5%, compared to their predecessor’s figure of ±3%. Minimum averaging time has been halved to 100 µs, compared to the AQ2200-221’s 200 µs. Other performance figures include a wavelength range of 800 to 1700 nm and a polarisation dependence of 0.02 dB.

One of the main applications of the new products is I/L curve (drive current/optical power) measurement of laser diode modules. Because the single-range power range of the new sensor module is as wide as 30 dB, the I/L curve characteristics can be measured accurately, quickly and seamlessly. Another is stress testing of an optical fibre cable. The ability of an optical fibre cable to resist impact is evaluated by measuring the momentary optical interruption and optical attenuation, as well as the degree of impact. Multiple AQ2200-212s allow optical inputs from the fibres to be measured following the application of a shock load, with the corresponding data sent to a data recorder via the analogue outputs.

“Our AQ2200 series Multi Applications Test system is already a highly capable and accurate solution for the measurement and analysis of optical devices and transmission systems,” says Terry Marrinan, VP sales & marketing Yokogawa Europe and South-East Asia: “With the addition of the AQ2200-212 and -222 optical sensor modules, we have taken these capabilities to new heights, offering optical manufacturers the most versatile and accurate optical sensors on the market.”