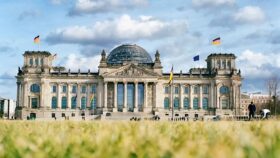 The German government has unveiled a strategy to triple the number of connections and ensure all households and businesses in cities and rural areas benefit from the latest mobile phone standard and are connected to the fibre-optic network by 2030. Presenting the plan, Germany’s Digital and Transport Minister Volker Wissing said that half of connections in both cities and rural areas should made by the end of 2025.

He said, “With our gigabit strategy, we want to achieve the digital awakening for Germany. Home office, streaming in the ICE (German intercity rail network) and reception in the mountain hut must finally be possible without any problems.”

According to a report from the European media network EURACTIV, the German telecommunications industry has pledged to invest €50 billion in private-sector fibre-optic expansion in the coming years. In regions where commercial expansion is not worthwhile, the state will provide public subsidies.

“Above all, it is about bringing a new dynamic into the expansion and reducing bureaucratic hurdles. To this end, planning and approval procedures will be simplified and accelerated, and the use of alternative installation methods will be improved,” Maximilian Funke-Kaiser, the digital policy spokesman for the liberal FDP’s parliamentary group, told EURACTIV.

The digital and transport ministry has also commissioned an impact analysis on where private sector expansion is necessary and where government subsidies are needed. However, the Federation of German Industries has warned that state-subsidised expansion and private-sector investments might not necessarily go hand-in-hand efficiently.

“Investments by companies are in danger of being unnecessarily crowded out by the wave of funding that has been triggered,” the federation said, pointing to the new strategy not giving companies sufficient certainty for their expansion plans. “We will continuously evaluate the implementation of the funding. If the evaluation shows that state funding is crowding out private-sector expansion, we will take measures to counteract this,” the digital and transport ministry responded. Amid a growing shortage of skilled labour, the strategy also lays out a general concept for the recruitment of skilled workers along the value chain.