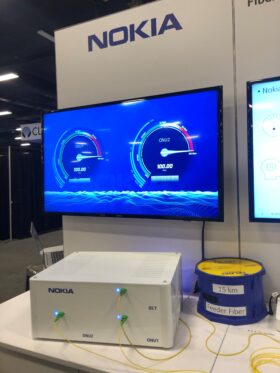 Nokia’s research arm, Nokia Bell Labs, has debuted what it says is the first 100Gbps broadband technology in the US at Fiber Connect 2022, Nashville, Tennessee. The prototype delivers 100Gbps speeds in downstream on a single PON wavelength, avoiding the need to combine multiple wavelengths carrying lower speeds. The prototype parameters mimic real-world conditions including fibre distances and power split. At the same event, Nokia also launched a network-in-a-box program for rural broadband builders.

The company says that whilst speeds up to 25Gbps are possible on existing optical technologies, higher speeds require new approaches. In the Fiber Connect prototype, Nokia Bell Labs is using advanced DSP techniques that will be needed for all technologies beyond 25G PON, including 50G and 100G PON. In an industry first for PON networks, the demonstration also showcases flexible data rates which allows for a more efficient use of the available capacity.

Stefaan Vanhastel, CTO Nokia Fixed Networks, said, “Fibre is the ultimate broadband infrastructure. It has almost unlimited capacity with only changes to the electronics at either end needed to increase speed. Today, fibre can already deliver 10G and 25G speeds. 50G will be available in the second half of this decade. With this proof-of-concept demo, we show that 100G is already within reach; all with the fibre network infrastructure that is being built today.”

Nokia also launched Broadband Relief Program for regional service providers in North America aspiring to close the digital divide at the same event. Nokia has set aside FTTH kits for delivery to rural service providers. Each ‘network-in-a-box’ kit is suitable for building a network for a town of up to 1,000 homes. Each Nokia Broadband Relief Kit is comprised of the necessary FTTH equipment, software licenses, support, and state-of-the-art in-home Wi-Fi gateways required to serve a typical town of 1,000 households. The kits support GPON and XGS-PON over a single port and fibre using Nokia’s Multi-PON-Module (MPM) technology.

Sandy Motley, president, Fixed Networks at Nokia, said, “The pandemic magnified the importance of having broadband regardless of a household’s geographical location. Families residing in rural communities, particularly those with school-aged children, suffered greatly from a lack of broadband and ability to participate in remote learning. We want to support the operators launching in hyper-localized markets but who cannot secure broadband equipment in these difficult times. In addition, we also believe that all service providers need to have one eye on the future, so all the kits can support 25G PON today or when the need arises.”

Nokia also announced that Metronet, the largest independently owned, 100% fibber-optic network provider in the U.S., is deploying Nokia’s next-generation PON technology to deliver 10Gbps speeds to subscribers with an upgrade path to 25G. Metronet is rolling out XGS-PON in eight new markets with more communities planned.

Jeff Heynen, VP of Broadband Access and Home Networking at Dell’Oro Group, said: “While nearly every company in every industry has been impacted by global shortages of critical electronic components and chips, Nokia’s global supply chain has allowed them to fair a bit better than other companies in this market vertical.” According to Dell’Oro, Nokia was the 2021 market share leader for XGS-PON equipment Seven out of 10 fibre homes in the USA are served using Nokia FTTH kit.