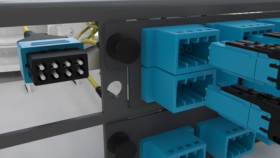 Legrand says that continually increasing bandwidth is forcing optical loss budgets to decrease and Infinium acclAIM offers the industry’s lowest optical loss by a significant margin – maximizing lifecycle with a single installation of a sustainable building asset for decades. It also simplifies connectivity with direct connections, with direct mating to an array of 2-fibre MDC duplex patch cords. The connector also features application-defined polarity, meaning polarity can be adapted to nearly any link configuration, pre-planned, on-site, or on the fly, with no options to determine when ordering or designing.

“Simply put, acclAIM is a revolutionary game-changer,” said Kristen Poulos, vice president and general manager Legrand Data Infrastructure, Legrand. “We are excited to bring to market the next generation of fibre connectivity that will prove to be the new standard for cost and performance.”

The acclAIM solution was honoured in the 2022 Lightwave Innovation Reviews.