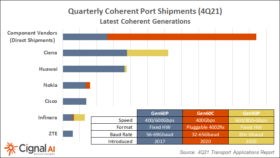 According to the 4Q21 Transport Applications Report from market research firm Cignal AI, shipments of 400ZR/ZR+ modules surged in 4Q21 as Cisco (Acacia) and Marvell rapidly scaled up production capacity. It adds however, demand from cloud operators is still exceeding supply, which will be increased this year as vendors such as Ciena, Neophotonics, and II-VI grow production. Cignal AI expects that shipments of 400ZR/ZR+ modules will triple in 2022 as cloud operators such as Microsoft, Amazon, and Google are joined by traditional network operators such as AT&T, Windstream, and COLT rolling out high volume deployments.

“Both webscale and telco operators are making fundamental changes to their network architectures due to the availability of pluggable 400G coherent modules,” said Scott Wilkinson, Lead Optical Component Analyst at Cignal AI. “Module shipments are ramping up quickly, with more than half of all shipments to date coming in the 4th quarter.” 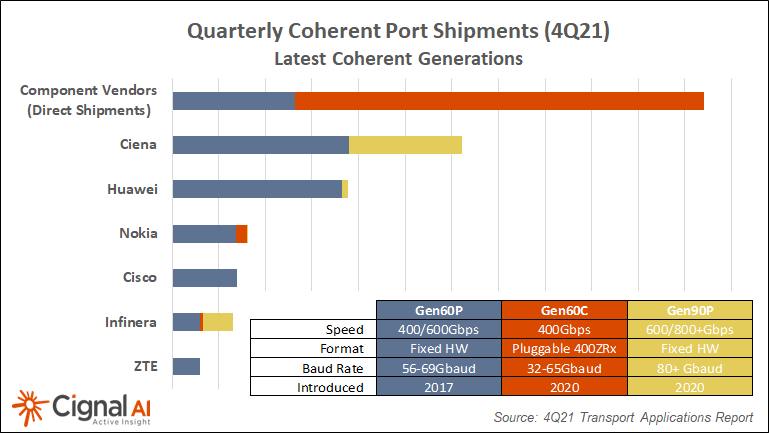 Compact Modular revenue in North America grew by +25% in 2021 and now represents over a third of optical hardware shipped in the region with Ciena being the market leader in this category.

It adds that only Huawei saw Packet-OTN sales increase during 2021, however Nokia’s continuing investment in its OTN portfolio has made it the leading western vendor of OTN and the company is best positioned to win business from Huawei in Europe.