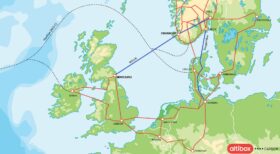 NO-UK’s open submarine cable system, featuring eight fibre pairs, runs for 700 kilometres between Stavanger (Norway) and Newcastle (UK) and is the shortest low-latency direct submarine route between the two nations. The system was developed by Altibox Carrier, which owns and operates fibre-optic cables, and supplied by Xtera, a turnkey provider of subsea systems. The project is managed by specialist consultants SubSea Networks Ltd.

Svein Arild Ims, Director at Altibox Carrier, said: “NO-UK has been developed to support the evolving requirements of businesses in Norway. We wanted it to deliver the highest bandwidth and capacity available across a submarine network in a sustainable way, and Ciena’s GeoMesh Extreme, combined with Xtera’s unique wide-bandwidth and low-noise repeater design, has achieved exactly that. The network has exceeded our expectations in every way and sets the standard for future connectivity between Norway and the UK.”