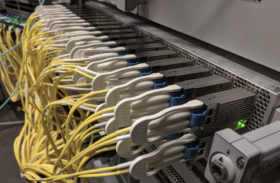 The company says that by using OFEC, the rOSNR capability of NeoPhotonics transceivers is improved beyond traditional 400ZR CFEC, allowing for multiple span coverage in amplified networks.  This may be applied to metro and IP-over-DWDM networks with extended-reach scenarios, with data rate coverage from 100Gb/s to 400Gb/s.  In addition, there are a number of applications where the fibre reach may not exceed the OIF ZR specifications, but because of older fibre, patch panels and other impairments, the link loss and impairment budgets could exceed that of a standard 400ZR link.  In these cases, NeoPhotonics’ OpenZR+ module can be used for 400G upgrades, where standard solutions are not practical.

“NeoPhotonics has developed an OpenZR+ solution to take advantage of the benefits of IP-over-DWDM and because many customers are interested in utilising small form factor coherent modules deeper into their networks,” said Tim Jenks, chairman and CEO of NeoPhotonics.  “Our Open ZR+ QSFP-DD transceivers combine an extended network reach and interoperable OFEC with our proven optical component and transceiver designs to address these needs.”

“The transceivers also augment our proven 400ZR solutions, which have multiple design wins at cloud and data centre switch customers, with new Open 400ZR+ compliant QSFP-DD and OSFP modules. The ability to transmit 400Gb/s over distances as long as 800km and more in a cost-effective manner is a real game changer,” concluded Jenks.

NeoPhotonics is a contributor to the Open ZR+ Multi-Source Agreement (MSA), which defines interoperability specifications for OpenZR+.