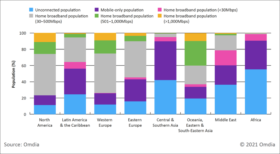 According to Omdia’s Global Fibre Development Index, by 2026, the percentage of the global population that is connected to the internet will increase from 58% to 70%. Of the 70%, 30% of the population will have access to the internet via a mobile device, and 40% will have a home fixed broadband connection. The report finds that although the connectivity divide is closing, speed and service inequalities are unfortunately widening.

Using the example of Latin America, it says that although 44% of the population will have access to fixed broadband services by 2026, only 5.3% will be on a connection delivering 500Mbps or more, and only 1% will have speeds of more than 1Gbps. In contrast, in North America the equivalent factors are 77%, 26%, and 11% respectively, and they are 66%, 40%, and 10% in Oceania, Eastern and South-Eastern Asia. At the other end of the spectrum, only 9% of the African population will have access to fixed broadband, with 84% of those users limited to speeds of less than 30Mbps. 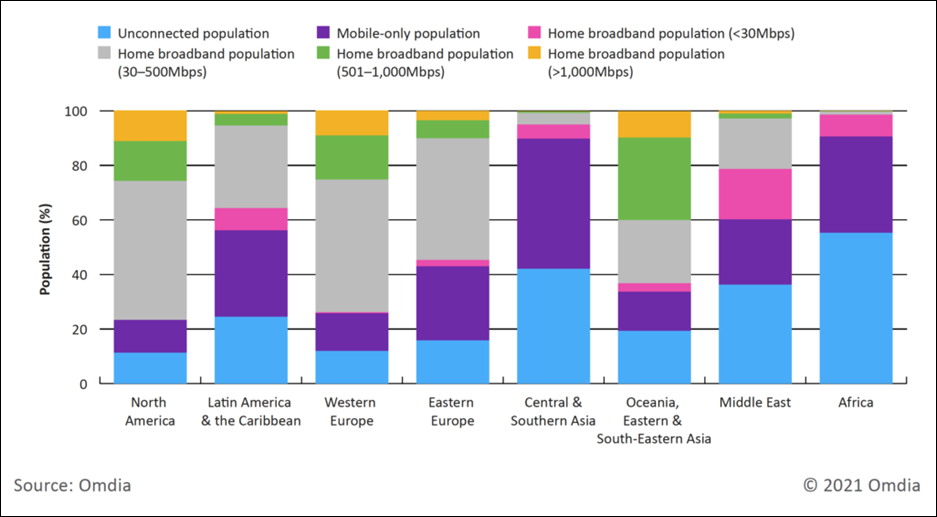 Singapore continued to lead the Index in 2021, followed by South Korea, United Arab Emirates, China, and Qatar. The first European countries in the ranking are Spain and Sweden in seventh and eighth position. They are closely followed by Luxembourg and Romania. The US heads the Americas region and is positioned 18th in the world overall.

As a broadband access technology, optical fibre provides an optimised, highly sustainable, and future-proof quality service. “Beyond economic benefits, an all-fibre network has significant environmental benefits over both xDSL and hybrid fibre coaxial (HFC) networks,” said Michael Philpott, research director, Omdia. “In 2019, Telefónica (Spain) stated that its FTTH network was 85% more energy efficient than its old copper infrastructure. The operator said its FTTH initiative had saved 208GWh over three years, representing a reduction of 56,500 tons of CO2 emissions. As countries move to a greener future, fibre-optic-based communications must be part of that plan.”

Omdia says greater investment in advanced, full-fibre broadband networks, is essential to closing this digital divide. To track the market, Omdia created the Global Fibre Development Index in 2020, that monitors investments in fibre across all parts of the network on a country basis. The Index covers 81 territories and is updated annually. Beyond coverage and household penetration, the benchmark tracks and ranks all elements of fibre network investment, specifically fibre access, mobile fibre backhaul, core fibre backhaul, and overall fibre QoS, which is currently measured by overall average downlink and uplink speed. The index has now been recognised by ETSI’s F5G group as being best practice for measuring fibre development.