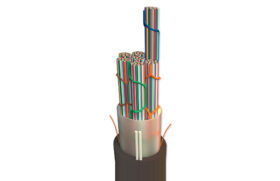 AFL, a subsidiary of Fujikura Ltd., Japan, has officially opened its new fibre optic cable facility in Swindon, UK, marking the start of commercial production of Fujikura’s Air Blown Wrapping Tube Cable (AB-WTC) using SpiderWeb Ribbon® (SWR®) fibre technology (pictured) in the UK. AB-WTC is an ultra-high density outside plant cable designed specifically for FTTH and access network applications. AFL’s new facility in Swindon is the first factory in the UK and Europe to produce this type of fibre optic cable. The investment in cable production in the UK for its European customers, such as Openreach, AFL will help speed up rollouts of full fibre broadband in support of the UK government’s target for 85% of UK premises to have access to gigabit-broadband by 2025. Fibre optic cables produced in the facility on Radway Road will be supplied to major UK and European network infrastructure projects that AFL and Fujikura customers are building. Fujikura’s investment in the facility will create new jobs in Swindon and the surrounding region including highly skilled engineering roles.

Paul Bennett, general manager of AFL in Swindon, says the new facility builds on AFL and Fujikura’s presence in the UK and their commitment to delivering projects in Europe. e says,

He explains, “This new cable technology allows us to manufacture high fibre count, high density fibre optic cables that are much quicker to install than conventional fibre optic cables. This technology is an exciting innovation in the industry; we are delighted that we will now be producing it in the UK, at our Swindon plant, where we have a strong, skilled workforce, and a long manufacturing history. AFL’s further investment in Swindon is not only significant for network rollouts and upgrades, but because we’ve added state-of-the-art equipment, also enables us to increase cable production.”

Openreach has been installing fibre optic cabling supplied by Fujikura since 2019. Speaking of the importance of the new plant to its rollout of 1Gbps FTTP (Fibre to the Premises), Andy Whale, managing director and chief engineer of Openreach said, “Our £15 billion network upgrade is hugely important, because research shows that nationwide full fibre broadband could add £59 billion to the economy every year, help level-up the UK, and bring around one million people back into work. At Openreach, we intend to build the furthest, fastest and to the highest quality of any network builder in the UK, and to do that we’re forming strong partnerships with innovative companies like AFL and Fujikura.”