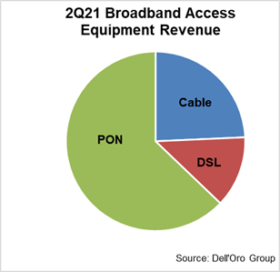 According to a newly published report by Dell’Oro Group, total global revenue for the broadband access equipment market increased to US$3.6 billion in 2Q 2021, up 7% year-on-year. Growth came from spending on both Cable and PON infrastructure.