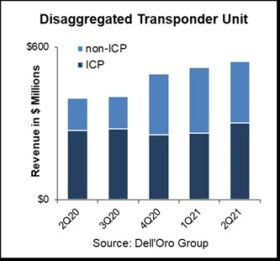 “Disaggregated DWDM systems outperformed the broader market, demonstrating the growing adoption of this platform type,” said Jimmy Yu, Vice President at Dell’Oro Group. “Really what we see is that this type of platform architecture, where transponder units are independent of the line systems, is being more widely embraced beyond the Internet content providers. Also, it is no longer just for metro applications. Recently, the highest growth rates have been from long-haul applications,” added Yu.