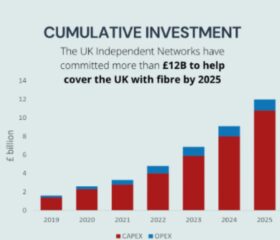 Over 2.5m homes and businesses in the UK can now connect to an independent fibre broadband network, according to new figures according to the Independent Networks Co-operative Association INCA (INCA). This represents over 110%t year-on-year growth and confirms the major contribution the ‘altnets’ are making to the Government’s target for delivering national coverage of gigabit capable broadband.

Compiled by Point Topic using data provided by independent network operators, this years ‘Metrics for the UK Independent Network Sector’ report shows that the sector is four times larger than a decade ago and continues to attract significant sums of private investment. Nearly £12 billion will be invested in the delivery of new full fibre connectivity by independent providers before the end of 2025.

“This report demonstrates that the ‘altnets’ are making a major contribution to meeting the Government’s targets for gigabit broadband connectivity” said Malcolm Corbett, CEO at INCA. “This current wave of investment, particularly in full fibre and wireless broadband networks, means there is no segment of the market where there isn’t a plan to build independent networks. This should be applauded and supported by government, regulator and the wider community”, Mr Corbett continued.

The Point Topic report provides an overview of the UK’s independent network operator sector as of end-2020 and early 2021 in terms of scale, coverage, ambitions and concerns. As in the previous two years it includes both fixed and fixed wireless network operators drawing on input from both INCA members and non-members. It says the Altnets’ collective footprint is now 10 times larger than it was just 4 years ago.

“Full fibre coverage from the independent sector is significant and accelerating,” commented Point Topic’s CEO, Oliver Johnson. “Conditions in the UK are encouraging for the altnets. Demand and supply are being driven by a renewed consumer appreciation and desire for better downstream and upstream capacity and stability as well as access to more finance and an encouraging regulatory environment,” he said. 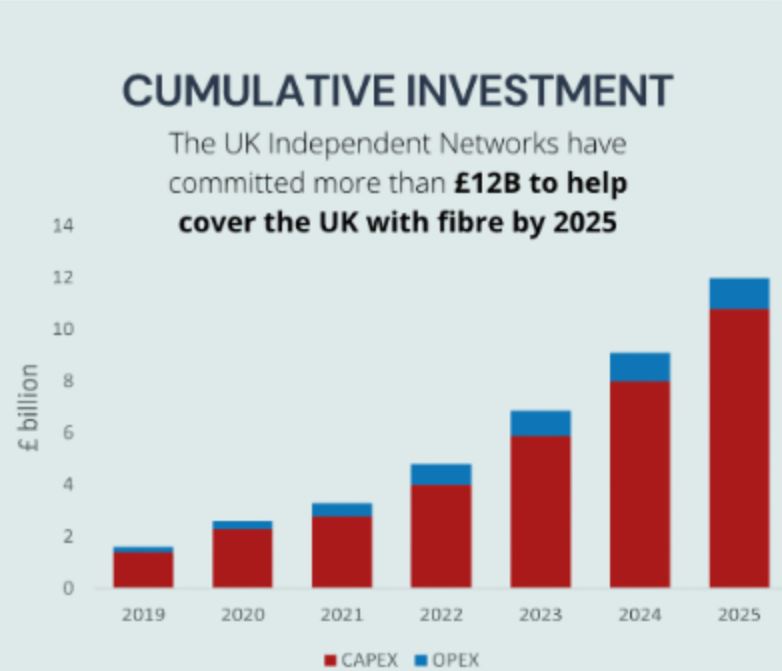 Community broadband provider County Broadband, based in Aldham, Essex, received a £46 million private investment in 2018 from Aviva Investors to build FTTP networks in rural and hard-to-reach premises across the East of England. The independent service provider (ISP), which has just been awarded two Gold Standard Quality Marks from INCA, after marking a seven-fold workforce increase in just three years, is engaging with over 100 villages in its FTTP rollout. Its chief executive, Lloyd Felton, said, “The accelerating rollout of full-fibre networks is a testament to the hard work of independent ISPs who have led the charge by identifying new market opportunities, lobbying for more training and skills, investment and collaborating to share insight and improve efficiency. FTTP technology has emerged as the clear frontrunner for delivering future-ready speeds and altnets have raised significant capital from enthusiastic investors. The focus now must be on removing barriers so these complex infrastructure projects can progress quickly to meet the government’s ambitious gigabit targets. We also need to continue educating consumers about the benefits of real full fibre compared to their existing copper connection.

Other key points in the report include: 845,000 properties are currently connected to either a full fibre or gigabit fixed independent network; gigabit infrastructure supplied by independent operators is expected to reach over 6.6 million premises at the end of 2021 with an estimated 1.1 million live connections made; by end-2025 nearly 30 million homes and businesses will connect to an altnet, with around 6.2 million live connections made and interest and commitment are growing strongly in the independent network sector, with £5.6 billion of investment and expenditure already spent or committed to be spent in early 2021.