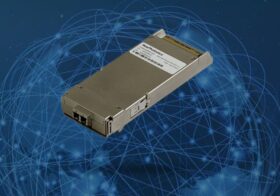 To achieve the data rate over the distance, the modules were operated at 69 Gbaud using 16 QAM modulation.  Probabilistic constellation shaping and a soft-decision forward error correction codec were used to achieve a required OSNR of approximately 20 dB, which is comparable to coherent line card port performance from leading chassis-based coherent systems. NeoPhotonics says the modules each consumed considerably less electrical power than line card solutions operating at comparable data rates and distances.

The 400G CFP2-DCO coherent pluggable transceiver modules use NeoPhotonics high-performance Indium Phosphide-based coherent components, along with its ultra-narrow linewidth tuneable laser.  The components are all shipping in high volume into multiple coherent system applications and include the Class 40 CDM, a polarisation multiplexed, quadrature coherent driver modulator (CDM) which features a co-packaged InP modulator with a linear, high bandwidth, differential driver, and is designed for low V-Pi, low insertion loss and a high extinction ratio; a Class 40 High Bandwidth Micro-Intradyne Coherent Receiver (Micro-ICR) designed for >60 GBaud symbol rates; and the Nano-ITLA which is based on the same external cavity architecture as NeoPhotonics’ Micro-ITLA and maintains comparable ultra-narrow linewidth, low frequency phase noise and the low power consumption in a compact package approximately one half the size.

“Coupled with our recent demonstration of 800 km 400 Gbps transmission using our 400ZR+ QSFP-DD, our CFP2-DCO 400G 1500 km transmission brings the use of pluggable modules in regional and long-haul networks closer to reality,” said Tim Jenks, Chairman and CEO of NeoPhotonics.  “The ability to implement a long-haul coherent transponder in the size and power envelope of a pluggable module is a testament to the progress that has been made in photonic integration and DSP development, and has the potential to be a game changer for telecom as well as DCI networks.”