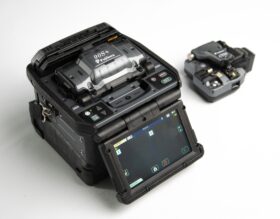 Fujikura Europe has launched its new 90S+ fusion splicer for engineers working on network upgrades and maintenance across Europe. Fujikura says the addition of the 90S+ model to its 90S series, which was first launched at the end of 2019, is in response to a doubling of internet use in some European nations in 2020, as families and businesses went online to stay connected.

Typically, the UK’s Openreach said its customers consumed 50,000 petabytes of data in the year, compared with 22,000 in 2019. In addition, Vodafone reported a 50% increase in internet traffic in Europe since the pandemic began. Fujikura says the thinking behind the 90S+ is that as the surge in usage puts more strain on network infrastructure, network operators have had to rely on regular maintenance and upgrades to keep people online. This means engineers’ work schedules are even busier, so a splicer which makes the entire splicing process faster and easier was an obvious choice.

Neil Bessant, Fujikura Europe’s Fusion Splicer Divisional Manager, believes increased maintenance and network upgrades across Europe means engineers need the latest splicing technology to be able to stick to strict project schedules. Bessant says, “According to the latest research, the pandemic has accelerated internet usage by a number of years, with high-speed fibre optic broadband lines in Europe expected to more than double during the next six years alone. With increased installations, upgrades and network upkeep, engineers need robust and reliable technology that will help to complete projects on time and in budget. That’s why we have launched the 90S+.”

He adds, “Against previous models, the 90S+ reduces overall working time and the unique design of the 90S+ has engineers front of mind. The easy splice positioning system makes it quicker for the user to handle the fibre, while real-time fusion control analyses the fibre’s brightness intensity during fusion – contributing to stable, reduced splice loss. The 90S+ is one of the most reliable splicers on the market as it offers quick return on investment, is able to withstand all the elements and has a lifespan over many years – all vital for engineers looking to win upcoming installation projects.”

In the last decade, Fujikura has launched a series of fusion splicers, most recently the 90R mass fusion splicer, and the specialist CT-105+, as well as upgrading its FSM-100 splicer series to include a new fibre alignment method.