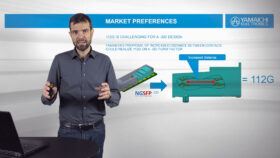 Transceiver form factors are evolving for all sorts of reasons, among them are 5G and advances in datacentre technologies. In his presentation at ECOC 2020, Yamaichi’s business development manager for data networking David Binder, explained the factors which are influencing the design of optical transceivers both now and into the future.

Yamaichi is one of the leading manufacturers for pluggable connectors. It contributes to many MSAs, and has provided the leading design for the host connector of DSFP, NGSFP and NGSFP-DD, which have become the leading 5G form factors in China.

Binder says, “5G is a game changer and fibre is replacing the copper-based coax cables in mobile front haul networks. This is a big opportunity, not just for us but for many companies. So, this is how we see the future of form factors in 5G. Right now, many companies are here with SFP56 or SFP28 and have plans to move to SFP112G. Other big OEMs have already decided to go for DSFP and NGSFP, and in the future we think NGSFP-DD, will be the dominating form factor thanks to its high throughput. Choosing the right form factor isn’t always easy. Backwards compatibility can conflict with data rate, dimension can conflict with transmit power and heat dissipation and so on, but these are not the only things you need to take care of.”

As a Japan-based company, Binder said that the Yamaichi faced a dilemma when looking to serve several markets, because different MSA’s can create conflicting interests. Obviously, if a product targets the Chinese market, a company would have an advantage if its products are compliant with a Chinese MSA. Yamaichi’s solution was to propose a form factor for a DSFP NGSFP connector that comes with a MultiFit feature. It has a higher throughput, it is the same size as SFP but with two channels, and is backwards compatible with the SFP cage, taking up the same area on the board and still conforming to the established MSA.

Yamaichi went into high-volume mass production with the connector, providing more than five million pieces for the 5G rollout in mainland China, but the development didn’t stop there. The challenge was to add one channel on top to increase the density, while keeping the same form factor. Binder explained that the dominant SFP form factor leaves some empty space in the rack unit, and the design of DSFP and NGSFP allows for the addition of an extra pin in those empty spaces. By adding an additional pin, he explained, it is possible to add another channel on top.

Binder said, “So, we have increased the density by adding two pins more, but the most established way to increase the density and maintain backwards compatibility is the double density approach, as we seen for QSFP-DD, SFP-DD and NGSFP-DD. This approach foresees a double row of contacts, which mirror each other. So, you have a legacy row on the front [of the unit] and you have the double density row. So, the old form factor module contacts on the front row, and the double density module will then contract on both rows. The double density approach comes with advantages and disadvantages. As the name indicates the densities have doubled, but there is a higher soldiering complexity, much more contacts to be soldered on the PCB and also more contacts in parallel, which makes the design vulnerable to cross talk. So, we think that double density is particularly challenging for 112G. Yamaichi made the proposal that NGSFP-DD, in which the legacy row would have the double density row, and the distance between those rows is increased significantly. This is how 112G was possible on a small double density form factor and the outcome is that we have one form factor that fits four module types and has the highest density by far, for that kind of small form factor.”

He went on to say that looking at the throughput of these form factors, it is clear that different form factors have different throughputs and also different dimensions, therefore take up different spaces on a rack unit. The form factors that have the highest throughput are usually used in data centres, being generally considered to be too large for 5G phone pole applications. For 5G, the relevant form factors are GSFP-DD, SFP-DD, DSFP and SFP. The highest throughput is 19.2Tbps, is for NGSP-DD. On the other side, SFP-DD has the same throughput as SFP. The assumption is that SFP-DD is only capable of 56G because according to Yamaichi’s experience the SFP-DD design means that the legacy row and the double density row are too close together, and they do not allow an SI performance of 112G per channel.

Binder concluded, “So the key takeaway is, get two channels with 112G, if you move from SFP to DSFP respectively NGSFP, but you can keep the SFP cage footprint. The other option is that you maximise without compromise. You give up the SFP cage and the footprint, but you get the highest density by far, for such a dimension.”

The presentation, complete with slides, is available here.