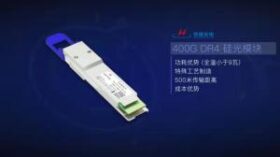 Hengtong Rockley’s 400G QSFP-DD FR4 transceiver also utilizes 7nm DSP chip, EML is used on transmitter side, and InP detector is used on receiver side, with the help of low-cost and mature WDM photonic device, making the entire module design and layout very compact. The power consumption is less than 9W.