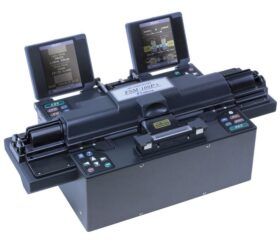 Fujikura, has launched a new specialty cleaver range, the CT-105+, and upgraded its FSM-100 splicer series to include a new fibre alignment method. The CT-105+ series of cleavers features a new clamping function which improves cleave angles by automatically detecting the optimal camping force. Alongside a 75% reduction in clamp force, there’s a 90%reduction in the consumption of fibre compared with the CT-105. The system also enables engineers to speed up the cleaving process significantly, and alongside improvements in blade material which mean a significant improvement in the lifespan of the blade, it creates significant cost and time efficiencies.

The series includes a micrometer backstop to improve cleave quality and the capability to angle cleave from 0 – 15 degrees. There’s also the option to add a fibre holder adapter which enables the fibre to be transferred from the cleaver to the fusion splicer smoothly without removing it from the fibre holder system.

Fujikura has also introduced a firmware update for its FSM-100P/P+ series which includes a new fibre alignment method called IPA2 (Interrelation Profile Alignment). IPA2 provides noise reduced profile data which makes it possible to distinguish small differences in fibre structure. This is a new set of tools for operatives aligning fibres that are less common, or those which are more difficult to align with existing methods, including Elliptical-core Fibre, Multicore Fibre and Octagonal Fibre.