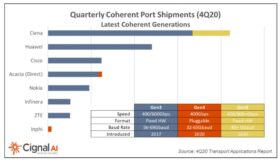 “Vendors beyond Ciena are finally ramping production of 3rd gen coherent technology and accelerating the growth of this new market,” said Andrew Schmitt, Directing Analyst at Cignal AI. “4th gen coherent 400ZR and 400ZR+ technology will be the next market share battleground entering 2022.” 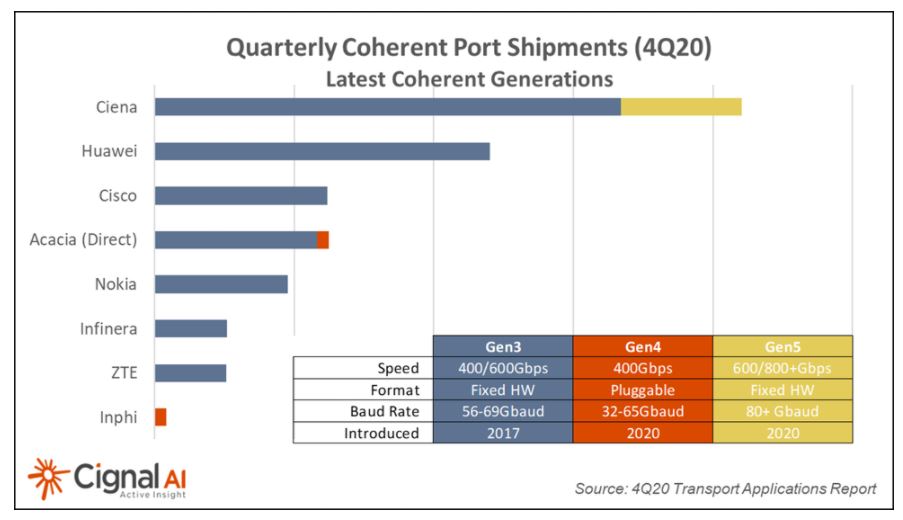 The report also found that fourth-quarter compact modular sales rose by more than 30% and significantly outperformed the overall optical market; Ciena lost compact modular market share during 2020 as Nokia and Huawei grew sales primarily in APAC. Outside of APAC, Ciena still claimed nearly ½ of the market. Cignal AI also found that APAC accounted for over 60% of Packet-OTN switching sales for the 4th quarter and for the entire year. APAC also led all regions in the growth of Packet-OTN sales for 2020 as OTN-based architectures continue to gain traction in the region.

400ZR early production shipments from Acacia and Inphi grew in 4Q20. All technical risk of these products has been eliminated, and demand is expected to outstrip production capability in 2021. 2022 forecasts for 400ZR+ shipments were raised based on stronger than expected interest from non-Cloud operators for 400ZR+.