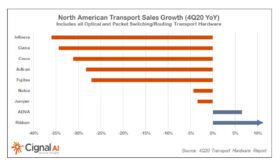 North American network operator purchases of optical and packet transport hardware dropped sharply in the fourth quarter, according to the most recent Transport Hardware Report from research firm Cignal AI. It says Tier 1 operators prioritised spending earlier in the year amid concerns of COVID-related supply disruptions and are now focused on using and deploying that purchased capacity. However, European spending trends improved in Q4 but were also down on an exchange rate adjusted basis.

“Despite the massive disruptions during 2020, overall spending declined only slightly in 2020,” said Scott Wilkinson, Transport Hardware lead analyst at Cignal AI. “But this quarter, almost all vendors felt the impact of capex pulled forward in the year due to operators scrambling to secure safety stock.” 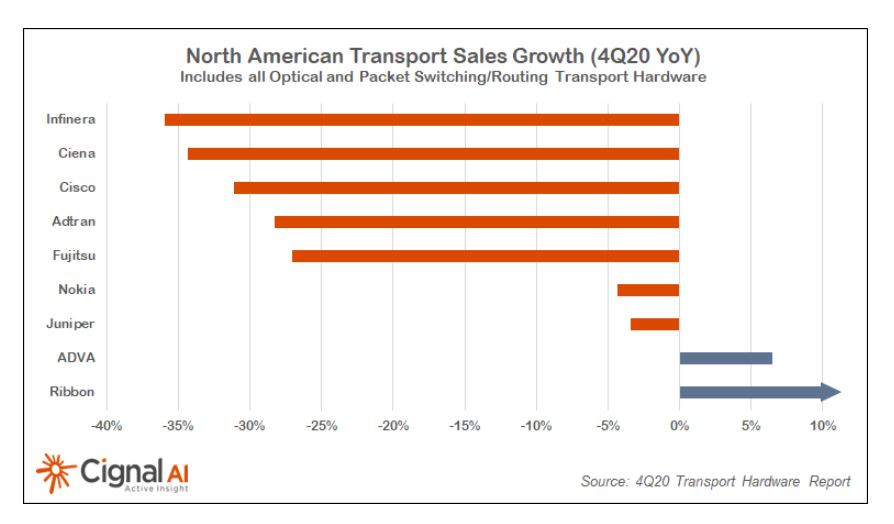 The report also found that for the entirety of 2020, North American optical transport hardware spending was down slightly against 2019, with Ciena and Infinera reporting flat year-on-year sales and Cisco, Nokia, and Fujitsu reporting declines. Optical sales growth in EMEA was steady for the quarter and for the year, while sales in China were flat. Meanwhile, Huawei continued to lead market share in both regions despite political pressure and new design wins by competitors. Cignal AI also says the pattern of North American packet switching and routing sales closely mirrored that of optical sales, producing a decline of almost -20% this quarter. Nokia sales grew for the quarter and the year, while Cisco market share declined. Nokia gained share in the region, and Ribbon led year-on-year growth as it secured a significant win in the region to boost sales by more than 10x.

In January 2021, Cignal AI reported that expenditures by North American cloud and colocation operators on optical and packet transport equipment declined 20% year on year in the third quarter of 2020 (3Q20), while incumbent operator spending increased 2%.