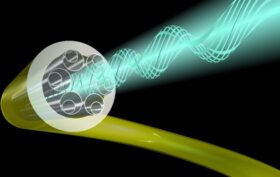 Researchers from the University of Southampton and Université Laval, Canada, have successfully measured for the first time back-reflection in cutting-edge hollow-core fibres that is around 10,000 times lower than conventional optical fibres. The discovery, published in The Optical Society’s flagship Optica journal, highlights yet another optical property in which hollow-core fibres are capable of outperforming standard optical fibres.

A small portion of the light that is launched into an optical fibre is reflected backwards as it propagates, in a process known as backscattering. This backscattering is often highly undesirable as it causes attenuation of signals propagating down the optical fibre and limits the performance of many fibre-based devices, such as fibre optic gyroscopes that navigate airliners, submarines and spacecrafts. However, the ability to reliably and accurately measure backscattering can be beneficial in other instances, such as the characterisation of installed fibre cables where the backscatter is used to monitor the condition of a cable and identify the location of any breaks along its length.

The latest generation of hollow-core Nested Antiresonant Nodeless Fibres (NANFs), which have been pioneered in the Southampton-led LightPipe research programme and applied to novel application fields within the Airguide Photonics programme, exhibit backscattering that is so low that up until this point it remained unmeasurable. To resolve this challenge, Optoelectronics Research Centre (ORC) researchers at the University of Southampton teamed up with colleagues from the Centre for Optics, Photonics and Lasers (COPL) at Université Laval, Québec, who specialise in research into highly-sensitive optical instrumentation. They developed an instrument that enabled the team to reliably measure the extremely weak signals back-scattered in the latest ORC-fabricated hollow-core fibres, confirming that scattering is over four orders of magnitude lower than in standard fibres, in line with theoretical expectations.

Professor Radan Slavik, Head of the ORC’s Coherent Optical Signals Group, says: “I am very fortunate to work in the ORC, where the long-term, world-leading research of my design and fabrication colleagues has led to the lowest-loss and longest-length hollow-core fibres ever made. My work has focussed on measuring the unique properties of these fibres, which is often challenging and requires collaborations with world-leading groups in measurement, such as the UK’s National Physical Laboratory and instrumentation, such as Université Laval.”

Dr Eric Numkam Fokoua, who carried out the theoretical analysis at the ORC to support these findings, says: “The experimental confirmation of our theoretical prediction that backscattering is 10,000 times less in our latest hollow-core fibres than in standard all-glass fibres demonstrates their superiority for many fibre optic applications. Moreover, the ability to measure such low backscattered signal levels is also critical in the development of hollow-core fibre technology itself, in providing a critical route to distributed fault-finding in fabricated hollow-core fibres and cables as needed to drive forward improvements in their manufacturing processes. Existing technology is simply not sensitive enough to work with these radical new fibres and this work demonstrates a solution to this problem.”

Research into improved optical fibres is key to enable progress in numerous photonic applications. Most notably, these would improve Internet performance that heavily relies on optical fibres for data transmission where current technology is starting to reach its limits.