The adoption of coherent pluggable optics will accelerate in 2021 as new technologies reach the market, according to the latest Transport Applications Report from networking component and equipment market research firm Cignal AI. It says fourth-generation coherent will extend beyond 400ZR to include higher performance solutions generally referred to as 400ZR+ and lower speed 100Gbps (100ZR) targeted at the metro edge.

After cloud operators initially provided a business case for 400ZR to component suppliers, those suppliers then designed and adapted products to address broader use cases such as higher performance 400Gbps and pluggable 100Gbps coherent. Incumbent, Wholesale, and Cable MSO operators still account for most of the global optical transport spending, and these operators will determine what role the new pluggable coherent optics will play in their networks. Cignal AI anticipates that pluggable coherent will cannibalize some standalone optical equipment, but new applications such as metro-edge connections for enterprises and 5G represent the largest near-term opportunity. 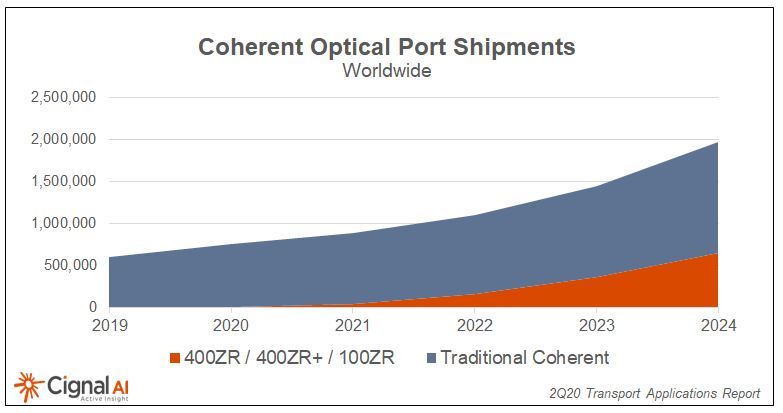 Other key findings in the 2Q20 report include: