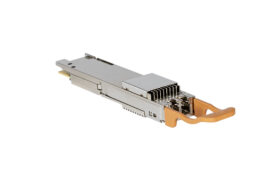 Acacia, a major player in the long-distance coherent transceiver market, has announced it is sampling a new range of point-to-point 100G coherent pluggable transceivers, specifically designed for unamplified edge and access links of up to 120km. As well as the expansion of Acacia’s portfolio into a new area, the announcement also marks the introduction of coherent technology into the short-range transceiver market.

Offered in a QSFP-DD form factor, which is widely used for client-optics, Acacia says the transceivers were designed to provide network operators with the ability to scale to higher data rates to meet growing bandwidth demands over some of the most challenging optical links, while also providing operational simplicity that may lead to overall network savings. It adds that data rates can be scaled up by leveraging the QSFP-DD slots with 200G and 400G versions in the future. Compared to alternative direct-detect solutions, coherent P2P solutions are extremely tolerant to fibre types, chromatic dispersion, polarization mode dispersion (PMD), and back reflections, which simplifies operational deployment.

Tom Williams, Acacia’s VP Marketing told Optical Connections, “There has been activity like CableLabs specifications for coherent point to point and we think a lot of that is starting to resolve toward actual solutions with the next generation of switches being built based on QSFP-DD form factors and having coherent that intersects the same form factor. So what we did is we we’ve taken some technology investments that we’ve had for the data centre space, but really optimised them and produced a new module designed for the access market, stripping out the things that are not really necessary for that market and trying to make it more cost competitive. For example, if you don’t need tunable lasers, you can save money using a fixed laser. We’re just doing what we can to address the unique requirements of that market, combined with making the price point more competitive and adding benefits of convenience.”

He added, “If you think about when coherent was first adopted in long-haul tech, what really caused it to grow so quickly was people started to realise how much more operationally simple it was when you got rid of all the dispersion compensation modules and you don’t need to worry about sending somebody out to characterise the link before you do a deployment. We think a lot of that still applies in access as well, where who knows how long the fibre might be and where you might have multiple splices along the fibre. It’s one thing to say in the lab, you’ve got a direct detect solution that does x kilometres reach, but in a practical deployment scenario, you never know what you’re going to run into. Coherent gives you the extra margin to address whatever you need. There’s a ratio of what people are willing to pay for that added margin and so it’s about trying to find the right intersection point.”

In anticipation of increasing demand for coherent optics in the edge and access markets, Acacia’s strategy is to go for scalable, high volume manufacturing techniques, using what it calls 3D Siliconization, a process which allows Acacia to manufacture everything except the laser. The PIC, which includes the modulator, receiver, drivers and TIA’s are all packaged in a single electronic component, based on silicon technology made in a high-volume electronics packaging house. The final assembly, the point at which the module is paired with the laser, is the only part of the process that is not done in the conventional way.

Williams comments, “We’ve used this high-volume scalable manufacturing approach, because intersecting with the same form factors is what the high capacity switches are currently addressing. I think there’s a number of different intersection points right now that make us believe that this market could be about to materialise. It’s one of those situations where network operators know they are going to need coherent technology in access and it’s a question of finding the right time, even the right solution, that enables that to happen. It’s similar to what we did earlier with our CFP modules in the metro transport market, and we’re always looking to see how we can push the adoption of coherent into some of the shorter reach interfaces.”

“Over the past decade, coherent technology has moved beyond its long-haul origins and is now firmly entrenched in the metro,” said Sterling Perrin, senior. principal analyst, Heavy Reading. “With the coming of 5G and edge computing, the time is right for coherent optics to take the next step and migrate to edge and access networks. Operators looking for scale and operational simplicity will find QSFP-DD coherent pluggables a compelling option compared to direct detect alternatives.”