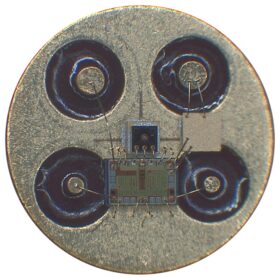 UK-based manufacturer of CMOS integrated circuit chips for optical communications HiLight Semiconductor, says it has shipped one million of its 25Gbps transimpedance amplifiers (TIAs) after ramping production at the beginning of the year. The chips are used primarily in 5G wireless networks and datacentre interconnects.

Christian Rookes, VP Marketing at HiLight, commented “Reaching this milestone in such a short time period demonstrates the demand for HiLight’s cost-effective high-performance TIA products whilst our customers can design with confidence knowing that year-on-year cost-downs are possible on CMOS 12-inch wafers. This milestone comes shortly after HiLight exceeded total shipments of 80 million CMOS ICs and the forecasted demand in 5G fronthaul, 10G-PON and Datacentre optical interconnects suggests a period of rapid growth lies ahead for which HiLight is well positioned to take advantage of.”

John Lively, principal analyst at LightCounting Market Research says that 5G fronthaul has driven demand for 25G transceivers from a quarter of a million a few years ago to more than ten million in 2020, and he expects more than 70 million units to be shipped for 5G fronthaul by 2025, counting both grey and coloured (WDM) optics. He adds, “China is consuming the vast majority of 25G transceivers today, due to its ambitious 5G deployment schedule. 25G server connections is another application that we expect to drive growth in the 25G optics over the next five years, and the same technology is used in some 100G (4x25G) transceivers as well.”

HiLight’s HLR25G0 TIA has been designed for PIN photodiode applications while the HLR25G1 is most suited to APD applications. The company says that while the TIAs can be used in a wide range of 25 and 100Gbps applications, they are particularly suited to reducing material and assembly costs in the highly competitive 5G CPRI wireless optical communications market segment that requires industrial temperature operation ranges. Both TIAs feature internal digital temperature control of key parameters to maintain sensitivity and overload performance across the operating temperature range.

The HLC25G0 PIN PD TIA is suited to cost reducing TO-can and chip-on-board applications, especially the compact TO33 often found in 25G and 100G optics. The IC features adjustable gain and a wide photodiode input capacitance range which enables the HLR25G0 to work with multiple photodiode types and all 5, 6 and 7-pin TO formats, for a wide range of applications. Importantly, the HLR25G0 meets required industry standards for optical sensitivity and overload with input powers of up to +4.5dBm at 4.5dB ER.

The HLR25G1 targets avalanche photodiode receivers and can achieve sensitivities of better than -24 dBm (BER 5E-5) in TO-can ROSA. It is particularly suited to applications that require excellent receiver performance for links of 10km or more.

Both TIAs are fabricated in a fine geometry pure CMOS process and designed specifically for low cost TO-can assemblies and chip-on-board (COB) applications due to their optimised pad-out, minimum bill-of-materials (BOM) and small die size – both TIAs have dimensions of just 0.7mm x 1.05mm.