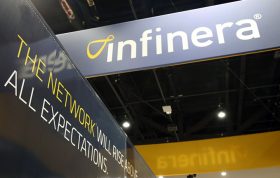 Infinera and US infrastructure provider Windstream, have completed a live network trial that achieved an 800G single-wavelength transmission over 730km across Windstream’s long-haul network between San Diego and Phoenix. In addition, by looping back the signal and derating it to 700G, transmission over 1,460km was achieved. The trial was performed using Infinera’s fifth-generation coherent optical technology, ICE6 and a Groove (GX) Series platform over industry-standard G.652-compliant SMF-28 fibre.

According to Art Nichols, Windstream’s VP of Architecture & Technology, the trial was fairly easy to set up. He told Optical Connections, “It was surprisingly easy actually, the duration between when we decided to move forward to trial and the execution was really short. We didn’t do anything very differently than we would have for a normal service enablement or setting up a new route. We dropped a couple GX boxes on either end of the connection in Phoenix and San Diego did some normal live testing and enabled the service. It was a really rapid, straightforward process.”

He added, “I will say though that we tested this maybe a little more thoroughly and comprehensively than we would with a normal span. We also took a lot more measurements so we can take advantage of that information as we’re looking at OSNR and trying to try to capture how applicable [the trial] will be to the rest of our network. As we look back into the balance of our links, the [rates we achieved] are actually conservative. We see 800G being really applicable and 700G is close to the predominance of our footprint, so it’s pretty neat.”

Nichols said the benefits of adopting the technology across its network would be twofold. First is cost efficiency. He explained that for a long-time, service providers have been driven into compressing revenue per bit. With increases in traffic demand in the range of 20% to 30%, revenue per bit is not necessarily keeping track, which drives Windstream to try to be as efficient as it can with the available assets.

The second benefit is improved spectral efficiency over the fibres. Nichols said, “Maybe more important is having really strong spectral efficiency to take full advantage of the fibre and all the components that make up long haul networks. That’s really essential for us as we try to keep pace with that traffic explosion. I would call this ‘service velocity’. We get many requests for really large amounts of bandwidth and really aggressive timelines. In particular from the ICP’s and web scale guys that are ordering terabytes at a time and are looking service time measured in days. If we if we don’t look forward and don’t try to push the envelope to enable the network with greater and greater capacity, our ability to fulfil those demands and keep pace with competition is pretty limited.”

Already an Infinera customer for a number of years, Windstream is expected to begin rolling out the technology to parts of its network later this year.

The Windstream trial is the latest in a series of 800G laboratory and live network distance trials which Infinera has successfully completed. Back in March of this year, the company completed a lab test using its ICE6 technology to transmit 800G over 800km on a single wavelength on Corning’s TFX® fibre. Later the same month, it successfully completed a live network trial of 800G single wavelength transmission at 96 Gbaud over 950 kilometres across a long-haul link over a major North American network operator’s production network.