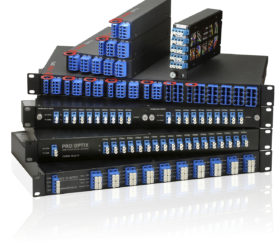 Fibre optical connectivity specialists Pro Optix has launched two new series of Wavelength Division Multiplexers (WDM) called the Pro MINI high-density series and the Pro NANO ultra-high-density series. The company claims these products represent a world first solution with density at 300% and 600% greater than traditional multiplexer solutions. It says the new next generation series allows users to significantly reduce their data centre footprint whilst capitalising on next generation design features. World first achievements for the NANO series include the use of CS connectivity in a multiplexer, the possibility to fit 3 x 40 channels DWDM multiplexers within 1U and the possibility of the XL version to utilise all available 96 channels in a DWDM multiplexer within 1U, allowing a fibre pair to be split 96 times. Pro Optix have partnered with Senko to deliver this next-generation in WDM technology with the patented CS technology.

Tom Nordin, CEO at Pro Optix commented “The new Pro MINI and Pro NANO series multiplexers bring a new compact concept to the marketplace that delivers unrivalled density in a unique combination of flexibility. The major driver is to reduce costs through having a smaller rack space footprint but being able to split fibres at greater levels to allocate to specific services or customers is also a huge benefit and cost saver. It is a massively flexible and simple solution that allows you to mix LC and CS connectivity as well as CWDM and DWDM within 1U.” He added “xWDM multiplexing was once seen as a complicated solution that required a team of experts, but that vision has changed. It is now understood that multiplexing is a simple way to quickly enhance how a business utilises fibre effectively, and this is enhanced by the fact that the solution is passive and therefore requires no power. Although the design of the multiplexer is new, the components within the design are proven technologies, so customers can immediately have a robust and reliable solution”.