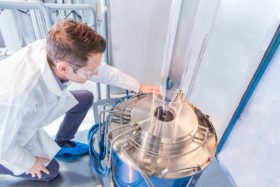 Cost saving during the production

When manufacturing optical fibers for telecommunications use, the critical factors for success are draw speed, yield, the quality of the fiber, and its optical characteristics. Telecoms optical fibers are usually produced in large quantities and as efficiently as possible.

Nextrom has developed a system for fiber draw, where the helium gas released from the cooling system can be collected and cleaned for re-use in the very same fiber cooling system. Optical fiber production is influenced by the reduction of global natural gas reserves, such as helium and its increased use in industry. Helium is used in cooling systems to improve the transfer of heat from the surface of the optical fiber to the cooling system. The use of helium-based cooling processes has been growing rapidly in recent years. This is reflected in the price of helium. The price for helium has increased in times. This rise in the cost of helium has an impact on the cost of fiber production, as helium consumption increases in line with production speed.

The system can provide a recycled helium recovery rate of 90%. Return on investments depends on nominal helium consumption and the price of helium.