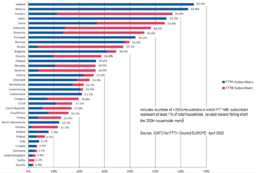 The FTTH Council Europe’s latest Fibre Market Panorama finds that the total number of homes passed with FTTH/B in the wider definition of European countries (EU39) by September 2019 reached nearly 172 million homes compared to 160 million in 2018 with 19 countries now counting more than 2 million homes passed. EU39 coverage of both network types by September 2019, reached 49.9%, up from 46.4% in 2018. Coverage growth for the 28-member European Union (EU28) were similar rising from 36.4% of houses passed in 2018, to 39.4% a year later. However, the number of FTTH/B subscribers only increased by 15% in EU39 with 70.4 million users in September 2019, and 20.9% EU28 countries over the same period.

The figures undoubtedly point to a slow take-up of full fibre in both households and businesses despite the rapid network roll-outs across Europe. Speaking at the FTTH Council’s webinar to launch the report, IDATE’s business development director and principal analyst for broadband and FTTx Roland Montagne said there were a number of factors impacting negatively on the take up of full fibre, including operators who have decided to go with coax or Docsis 3.1, thereby delaying investment in FTTH. Another factor was that of misleading advertising by some network operators, an issue about which the Council expressed concern back in mid-2019. Montagne said, “We are also seeing misleading fibre advertisements. Some operators are advertising on speed, while not guaranteeing speed [because] they are using alternative technologies. There is some work to be done here by regulators to guarantee the veracity of advertisements in terms of speed.”

He added that Fixed Wireless Access (FWA) and hybrid access was becoming more common in isolated areas and with the deployment of 5G and high spectrum bands, delay in some residential markets was likely. Other issues included some European countries looking to introduce high-speed broadband had not specified a preferred technology and perhaps more importantly, there is a lack of mass market applications for monetising FTTH. Montagne said “Until now, the only mass market application for FTTH has been video. We all know the success of the OTT platforms and that video formats are progressing with 4K and 8K being announced. Those applications are really the first drivers for the residential market, but I think the Covid-19 crisis demonstrates that having a performing access platform, especially using FTTH, is necessary for the economy to keep work going on. Today, webinars and video calls with customers and our teams are multiplying.”

The news it not all bad however. Montagne explained that there are several factors which will have a positive impact on the adoption of FTTH going forward. These include the demand for bandwidth that continues to grow. She said that at present, many operators are deploying PON technology, but they know that fibre is a future-proof technology that they will be able to update quite easily. Another thing that will help is that in 2019, more governments have launched subsidy programmes aimed at extending FTTH to previously un-served and more challenging areas including rural communities. He said, “Today, this is a domain that is quite important particularly for the governments of the EU39 countries.” He continued, “We see also that an increasing number of operators that are moving to FTTH, focussing on copper switch-off, which is the best solution to make economies on the OpEx side and to migrate copper-based subscribers to FTTH. In Europe, most incumbent teleco’s are including [switch-off] more and more at their strategies.” He added that increasingly, operators are reaching infrastructure sharing agreements and reducing overlay in some areas. Also, the European Digital Agenda to deploy a high-speed broadband network in Europe has help to define new initiatives to reach that goal by 2025.

Editorial comment: There are a number of forces at work when it comes to the widespread rollout of FTTH, indeed, there may also be some difficult financial decisions over funding 5G and FTTH simultaneously to be made, which might also impact on rollout. Also, given that 5G largely depends on fibre for any-haul and low-latency access to data centres, there’s a good chance that operators will concentrate on haulage and leave FTTH to the fixed-line incumbents and the alt-nets, meaning that FTTH subscriber numbers might not reach the giddy heights the industry was hoping for.