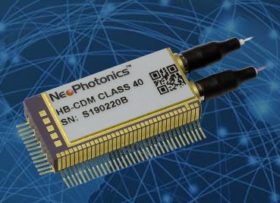 NeoPhotonics’ HB-CDM is available in a small form factor (25 x 12 x 5 mm) package which co-packages a linear, quad-channel, differential 64 GBaud driver with an Indium Phosphide based Mach-Zehnder (MZ) quadrature modulator chip. It provides coherent multi-level modulation formats, such as DP-QPSK, DP-16QAM and DP-64QAM, to support coherent transmission up to 64GBaud. The HB-CDM is compliant to the OIF’s Implementation Agreement OIF-HB-CDM-01.0 “High Bandwidth Coherent Driver Modulator”, and assures users a 3dB EO bandwidth of greater than 40GHz. The compact size fits in a CFP2-DCO pluggable module.

The HB-CDM is also available in a “C++” CDMTM Modulator version, which supports tuning across the full “Super C-band” covering 6.4 THz of spectrum or up to 50 percent more than standard systems. The C++ CDMTM Modulator, Ultra-Narrow Linewidth Tunable C++ LASERTM. Micro-ITLA and 64 Gbaud C++ ICRTM Receiver are combined in NeoPhotonics C++ CFP2-DCO transceiver, which is the industry’s first pluggable transceiver module able to deliver as much as 34 Terabits of capacity per fibre. The module can support 85 channels of 64 Gbaud data at 75 GHz channel spacing and effectively increases the capacity of an optical fibre by as much as 50 percent over standard systems at comparable distances.