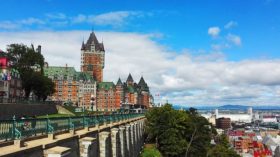 Zayo Group has unveiled a new 100G capable wavelength route from Montreal, Quebec to Albany, New York. The new route will provide multiple terabits of long-haul transport capacity between Montreal, Canada, and major north-east US markets, and is expected to be in service this month (January 2020).

The wavelength route will offer full, physical triversity out of Montreal, providing a shorter and more direct path to Albany. From Albany, routes traverse either East to Boston or South to New York City and most other north-east markets. It also provides an attractive additional route from Toronto, Canada’s financial capital, to New York City.

Montreal is the largest city in the Quebec region and its metro area is a hub for technology business, supporting artificial intelligence (AI), gaming, commerce, cultural and finance activities. The wavelength route provides a differentiated option for carriers and enterprises needing high-speed, dedicated connectivity.

Annette Murphy, executive vice president of lit solutions at Zayo, said, “This route enables customers to directly connect from Montreal to New York City, Ashburn, New Jersey, Philly and other major cities in the north-east, without having to double the distance and latency via routes that traverse west. This also provides a new redundant and diverse option out of Toronto back to Montreal and the East Coast and strengthens our position in the pan-North American marketplace.”

At the end of 2018, Zayo announced plans for two new unique, low-latency long haul dark fibre networks from Columbus, Ohio to Ashburn, Virginia and Dallas, Texas to Atlanta, Georgia. Supported by signed user commitments, the expansions were expected to be attractive to additional strategic customers looking for connectivity between these cities.