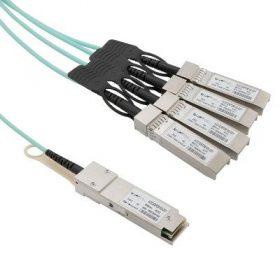 At the end of 2019, LightCounting released 12th edition of its active optical cables (AOCs) and embedded optical modules (EOMs) report which found that despite the diversity in products, nearly two-thirds of the total units from 2020-2024 will be due to just two products, 1x10G and 1x25G AOCs. That’s in spite of the fact that the company’s new AOC unit forecast for the year 2023, shown in the figure below, is 43% lower than its December 2018 forecast, mainly due to reduction in demand estimates for 1xN products by Chinese hyperscale datacenter operators. LightCounting’s AOC revenue forecast for 2023 has increased 20% however, due to a new 400G (8x50G) AOC that it believes will see significant usage in high performance computers (HPCs), cloud, and core routing applications.

LightCounting also sees an acceleration of speed through the forecast period. It says that while 100G products are ramping quickly in both HPC and the data centre, HPC is now moving quickly to reach 200G, beginning in 2019. However, one upcoming supercomputer could consume 243,000 100G AOCs if installed fully scaled out. Cloud usage of 100G AOCs is finally broadening but the report does not assume that 200GbE AOCs will become a significant opportunity in Ethernet.

While 100G products are ramping quickly in both HPC and the data centre, HPC is now moving quickly to get to the next speed, 200G, beginning in 2019. Still, one upcoming supercomputer could consume 243,000 100G AOCs if installed fully scaled out. Cloud usage of 100G AOCs is finally broadening but we are not assuming that 200GbE AOCs will become a significant opportunity in Ethernet.

Since AOCs close off the optical technologies to the outside world without having to conform to interoperability constraints as do parallel optic transceivers, AOCs create a fertile ground where vendors can innovate and create a multitude of new approaches to forming an optical link. Vendors can pick whatever wavelength, fibre, attachment technique, modulation technique and semiconductors they wish as the external interface is simply a copper interconnect conforming to a particular protocol.

The unique characteristics of HPC clusters have been well suited to the usage of AOCs. InfiniBand clusters are mostly built using AOCs. The HPC market moves through doubling data rate cycles with ever faster adoption. Mellanox InfiniBand HDR for 200G got off to a late start but since mid-2019 is being adopted more quickly than any previous rate. A while back Intel announced their second-gen Omni-Path Architecture which was to incorporate their silicon photonics into the processor package. This will not happen as Intel has now shut down their Omni-Path program in its entirety. We have not included a forecast for 200G AOCs because we don’t have data from a sufficient number of vendors.

LightCounting notes that core router manufacturers have a “pay-as-you-grow” approach between multiple chassis. This has worked out better using AOCs than by using embedded optical modules on their switch fabric boards. They are finally moving beyond 12x10G CXP AOCs and shifting to 12x25G CXP AOCs. At the same time, new core routers with disaggregated chassis are finding deployment with 100/400G AOCs connecting white boxes similar to leaf and spine switches. AT&T even submitted their own design white boxes to the Open Compute Project and they anticipate extensive applications in their network. It says that among top 500 machines, the use of proprietary EOM interconnects has shrunk, in favour of cluster systems interconnected with Ethernet, InfiniBand or (previously) Omni-Path Architecture. These all use AOCs and DACs. One new supercomputer developed by Fujitsu used 12x25G EOMs but its successor will use 100G AOCs. The new Cray supercomputers with proprietary Slingshot interconnects will make use of optical links in the form of 2x200G AOCs.

In the late 1990’s, telecom equipment used optical interconnects between racks of multi-chassis systems such as optical cross connects. Those systems collapsed physically into single racks but we are now seeing new-generation multi-chassis systems for optical transport to handle ever-increasing bandwidth. While 4 or 5 equipment OEMs are planning or considering the use of EOMs between chassis, we are assuming this will bring a good but not huge total volume, ramping from 2018 onward.

Other applications of EOMs, including military, aerospace and industrial, are high-value, long-lived opportunities. These have had success since 2011 and we see accelerating growth as optics replaces copper in places where performance, size, weight and power trumps cost, particularly in mil/aero. So far, this category is a collection of niche applications but those applications actually number in the hundreds. This is the key driver to good growth in EOMs for the forecast period. Embedded computing will be a key driver but airborne platforms from UAVs to the F-35 are good examples of near-term shipments of mil-spec EOMs. Commercial aircraft and many other applications will cause a good ramp towards the end of our forecast period.