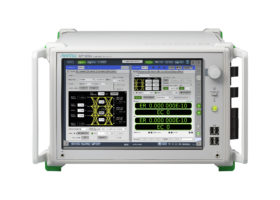 FEC is being adopted at data centres using PAM4 to implement faster and larger-capacity 400-GbE, etc., communications with assured quality. In addition, there is also active development of 4- and 8-multilanes as well as PAM4 technologies. As a result, transmission quality tests for QSFP-DD, OSFP, etc., optical modules urgently need techniques to confirm the degree of error correction using multilane FEC patterns with added jitter and ISI stress. Moreover, such measurements require a signal source for accurate control of the 8 synchronised channels and the phase and patterns between channels.

Since accurate FEC tests are impossible using methods adding jitter stress to just one out of 8 lanes, it is necessary to test by adding jitter stress to all synchronised lanes. Consequently, the Anritsu MP1900A series supports generation of 8ch synchronised FEC patterns defined by the 400GBASE-LR8/FR8*5 standard, as well as error insertion, and jitter and ISI stress functions using the MU196020A PAM4 PPG Multimode with the Inter-Module Sync, FEC Pattern Generation, Emphasis, and Adjustable ISI options. 8ch stressed signals synchronised using these functions are transmitted to QSFP-DD, etc., transceivers to implement more-reliable, high-reproducibility FEC tests by analysing the results after error correction.