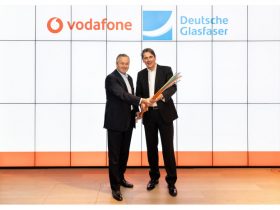 Vodafone Germany and open access network provider Deutsche Glasfaser have announced a cooperation to expand FTTH/FTTB access to private German households. The plan is for Deutsche Glasfaser to implement the passive fibre network and for Vodafone to lease, market and operate services on a long-term basis. The initial target market are consumers in the state of Hesse. A prerequisite will be a successful pre-marketing campaign, which Vodafone is expected to launch in early 2020 in the first municipalities in Hesse. A statement from the duo indicates that preliminary talks with the first municipalities in Hesse are already underway.

The open access business model, referred to by the partners as the private operator model, is designed to promote more rapid fibre network expansion than the traditional build-and- operate arrangement.

“We look forward to the cooperation projects with Vodafone and together we want to set an example. And that such wholesale cooperation not only saves resources and makes sense, but can also and above all accelerate the digitisation of entire regions,” commented Uwe Nickl, CEO of Deutsche Glasfaser.

The cooperation makes Vodafone, in addition to the operator htp in Lower Saxony, the second cooperation partner of Deutsche Glasfaser using the private operator model.

“Together with Deutsche Glasfaser, we show that the supply of entire regions with high-performance fibre can run quickly and efficiently. We could be even faster if the promotion of Gigabit network expansion was easier and less bureaucratic. Here must be improved,” added Vodafone Germany CEO Hannes Ametsreiter. “Together with Deutsche Glasfaser, we want to soon bring the first communities from the digital hard shoulder to the fast lane. And so connect people and companies on site in less than two years to the fibre optic highway. Which municipalities will be, we announce promptly.”

The new Deutsche Glasfaser-Vodafone tie-up gets the thumbs up from the German association of alternative operators, Bundesverband Breitbandkommunikation e. V. (BREKO).

“The comprehensive fibre optic expansion in Germany can only work in the interaction of all market participants,” said BREKO Managing Director, Stephan Albers. “This current example once again clearly shows that the fixed network in Germany is booming. Our members build the fibre optic networks and make up the vast majority of all direct fibre connections available in Germany. Therefore, it is only logical that even large market players such as Vodafone now have to use these future-proof fibre-optic networks based on open access models to supply their customers. The motto must be: Open Access instead of nonsensical superstructure!”

In September of this year, Deutsche Glasfaser entered into an agreement with UK-based Emtelle, for the supply of a range of tube bundles and fibre cables for the operator’s FTTH rollout, in a contract worth €63 million.