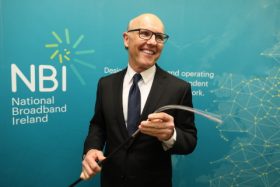 The project aims to end the digital divide between urban and rural communities, promising to provide “equal opportunities for every home, farm and business in Ireland.”

“Once the plan is completed 100% of the population will have access to a modern and reliable broadband network, capable of supporting current and future generations,” said NBI.

The scheme will involve laying 146,000km of fibre cable to connect every one of the 537,000 premises in the roll-out area. “The full deployment across 96% of Ireland’s land mass is recognised as one of the most ambitious telecom infrastructure projects globally.” NBI added.

“We want to see residents and businesses thriving in rural parts of the country and ensure they have a bright and sustainable future, with the same opportunities as those in urban areas.”

The announcement comes after the European Commission approved €2.6bn of state aid for the plan. Commissioner Margrethe Vestager, in charge of competition policy, said, “The National Broadband Plan in Ireland is expected to address the significant digital divide between urban and rural areas in Ireland, enabling Irish consumers and businesses to benefit from the full potential of digital growth.”

Ireland prime minister Leo Varadkar said, “Broadband will be the biggest investment in rural Ireland ever. We can have more people working from home, a better work-life balance, fewer car journeys and fewer greenhouse gas emissions. We can connect better with the world, with family members, with business, with new ideas and new ways of doing things.”

Granahan McCourt says it has previously built 24 national telecom networks across Ireland, Europe, US and Central America and deployed over 120,000km of fibre across 56 projects, but the new Irish project is the biggest yet.