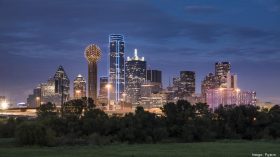 AT&T has activated its first 400-gigabit optical connection carrying live internet traffic across its network. The operator says the  connection between Dallas and Atlanta is believed to be a first in the industry. This isn’t a proof of concept, says AT&T, but a significant upgrade to its production network, built on flexible, low-cost white box hardware.

The 400G Dallas/Atlanta facility was deployed on an SDN-enabled Ultra Long Haul (ULH) system from Ciena. The 400G circuit was routed and configured completely through software using Ciena’s Manage, Control and Plan (MCP) domain controller. The 400G transport was terminated in the Dallas and Atlanta offices by a white box router from UfiSpace that is compliant with the Broadcom Jericho2 Distributed Disaggregated Chassis (DDC) design that AT&T recently submitted to the Open Compute Project (OCP).

400G pluggable transceivers from InnoLight were installed in the white box router and Ciena transponder to create the cross-office connectivity between the packet and optical technologies. Ciena’s MCP controller is integrated into AT&T’s ONAP management and control framework using an API specified by the Open ROADM Multi-Source Agreement (MSA).

The optical transport system consists of a new 400G transponder based on Ciena’s WaveLogic Ai coherent optical technology. The Ciena ROADMs have been upgraded with new software to support a sophisticated feature known as flex grid. This allows, through software control, the optimal allocation of spectrum on the long-haul fibre based on the required speed and reach of each wavelength.

“The move from a 100G interface to 400G is a milestone for the communications industry, because it means we can continue to stay ahead of the tsunami of data demand we’ve seen over the last decade-plus,” said Andre Fuetsch, executive vice president and chief technology officer, AT&T. “This accomplishment also speaks to the tremendously collaborative ecosystem we’ve helped foster with key innovators in optical technology, white box hardware, and software-defined networking. Ciena, UfiSpace, Broadcom, and InnoLight have brought great ideas and technologies to bear to make 400G a reality.”

AT&T says that 5G is coming fast and the company plans to have 5G nationwide in the first half of 2020, it will also begin deploying 400G across its network in 2020. It says planning for this upgrade has been going on for a long time, so a large portion of the optical network equipment its been installing over the last year or so can be upgraded to 400G with a simple software update, making for a seamless transition.