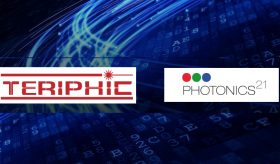 The European Horizon 2020-funded consortium TERabit optical transceivers based on InP EML arrays and a Polymer Host platform for optical InterConnects, also known as TERIPHIC, is working on the development of optical transceiver modules for datacentres – with the aim of cutting power consumption by 50% per Gbps.

Aiming to surpass today’s emerging high rate transmission standard of 400GB per second, TERIPHIC this week also stated that it expects its modules to cost €0.3 per Gigabyte per second. The three-year, €5.6m project is scheduled to run until December 2021 and has received a grant of €4.7m from the European Commission via the Photonics public-private partnership.

“Photonics is essential for the future of datacentres,” commented Panos Groumas of the TERIPHIC project coordination team. “We intend to develop low-cost terabit optical transceivers through the automation of current photonic integration concepts and processes in commercial assembly machines.”

He added, “While 400G is impressive, and was demonstrated in 2018, high-performance computing, edge computing and machine learning end-user experiences will not run on existing speeds of 400Gbps. The TERIPHIC project is developing mass-production-compatible 800Gbps pluggable modules with eight lanes and 1.6Tbps mid-board modules with 16 lanes having at least 2km reach.”

Professor Hercules Avramopoulos, project leader, commented, “This project brings together electro-absorptively modulated laser (EML) arrays in the O-band, photodiode arrays and a polymer chip to act as the host platform for the integration of the arrays and the wavelength mux-demux of the lanes. The integration will rely on butt-end-coupling steps, which will be automated via the development of module-specific alignment and attachment processes on commercial equipment.

“The new transceiver design introduced by TERIPHIC will allow significant cost savings, due to assembly automation of both the transmitter and receiver optical subassembly (TOSA/ROSA) parts, and also at the packaging level, resulting in a cost of around €0.3 per Gbps for the transceiver modules.”

FiconTEC provides custom equipment for the automated assembly processes and III-V Labs provides the high-speed electronic driver chips. Finally, Mellanox Technologies will take up the packaging of the transceivers.

The project is coordinated by the Photonics Communications Research Laboratory of the Institute of Communication and Computer Systems at NTU Athens, Greece.