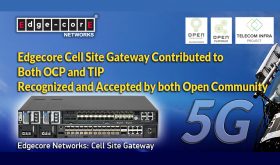 This portfolio of contributed designs is expected to accelerate service provider adoption of open networking options to meet the increasing bandwidth and service demand in the upcoming 5G rollouts.

George Tchaparian, President and CEO of Edgecore, commented, “With the latest cell site gateway contributions, we are continuing to expand our leadership position in both the OCP and TIP communities, building upon previous contributions of open network leaf/spine switches, disaggregated OLTs, and optical transport systems.”

He added, “Edgecore Networks supports the recently announced collaboration between TIP and OCP and the path for solutions within their communities to be made available across both organisations. This collaboration will ultimately provide operators with more choice and flexibility.”

The AS7316-26XB and AS7315-27X-DCSG are temperature-hardened and optimised for deployment in outside plant enclosures and support base stations with full IEEE 1588 timing and GPS functions, provide backhaul uplinks at 25G or 100G Ethernet, and airflow and stacking port options.

Edgecore will be exhibiting both the AS7316-26XB and AS7315-27X-DCSG, in addition to other open network products for data centre and service provider networks, at the forthcoming Broadband World Forum in Amsterdam (Booth E5) between October 15th-17th.

Bill Carter, CTO, OCP Foundation, commented, “We welcome Edgecore’s new cell site gateway router new design contribution. The company has made many important contributions to the OCP Networking Project over the past six years, and we look forward to continued collaboration.”

Attilio Zani, Executive Director, TIP Foundation, added, “TIP is creating a new approach to building and deploying telecom network infrastructure, and we thank Edgecore Networks’ for their continuous contributions to TIP, including the Cassini open packet transponder, and now the family of disaggregated cell site gateways.”