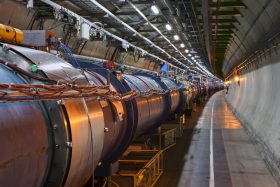 The CERN supercollider generates many terabits of data per day, which SURF collects and distributes to Dutch research and education facilities for analysis, investigation and learning. However, CERN is but one of the nearly 200 institutions and more than 1 million users SURF caters to, today.

SURF’s optical backbone, SURFnet 8, was upgraded a couple of years ago to address the astonishing rate of growth in the demand for bandwidth. The search for a new vendor encompassed nine candidates, from which ECI was selected. Based on the Apollo family, SURF continues rebuilding its optical backbone for the future, achieving super-high performance, economic scalability, ease of operations, and a seamless migration from the previous infrastructure. The latter exemplifies an Open Line System (OLS) by carrying both ECI and alien lambdas.

“The TM1200 adds yet another layer of flexibility and programmability to our optical capabilities. With the TM1200 we can now optimise modulation schemes in line with our requirements and the distances transmitted, ensuring optimal use of our fibre capacity,” said Rob Smets, Network Architect at SURF. “We were pleased to discover we could improve link capacity and efficiency by approximately 150% just by replacing the card, even on our ‘old’ (G.655) fibres. With ECI’s help and our continuously updated network capabilities, we will continue to provide our millions of users with the levels of performance and service to which they’ve become accustomed.”

In its efforts to continually reduce cost per bit without affecting performance, SURF is constantly trialling new developments, including the Apollo TM1200. The TM1200 delivers unmatched spectral efficiency and elasticity through software-controllable, continuous modulation. However, the TM1200 is only one building block in ECI’s Apollo optical platforms. Carriers can also programmatically control additional aspects of their optical performance, including spectrum, client and line interfaces, ROADMs and more. This enhanced programmability ensures carriers are operating at maximum efficiencies, guaranteeing end-to-end service availability, and generating new revenue streams.

“We understand that today’s operators are under pressure to squeeze the most out of their network infrastructures. Optical backbones will forever be required to support, and exceed, simple low cost per bit transport,” said Christian Erbe, VP Sales EMEA at ECI. “However, there are increasing requirements for openness, programmability and interworking with the packet layer. ECI has a very strong relationship with national research and education networks (NREN) worldwide, and we are proud of our long-lasting partnership with SURF.”