In its second interim update to the last annual Connected Nations report, published in December 2018, UK regulator Ofcom tracks communications providers’ progress in increasing the availability of communications services for people and businesses. Based on mobile coverage and fixed broadband availability as of May 2019, Ofcom found that the number of properties able to access superfast broadband, as defined as download speeds of 30Mbps and above, is now above 28 million; the proportion of the UK with access to superfast connections remains broadly stable at 95% of UK premises, with the actual number of properties covered continuing to increase. 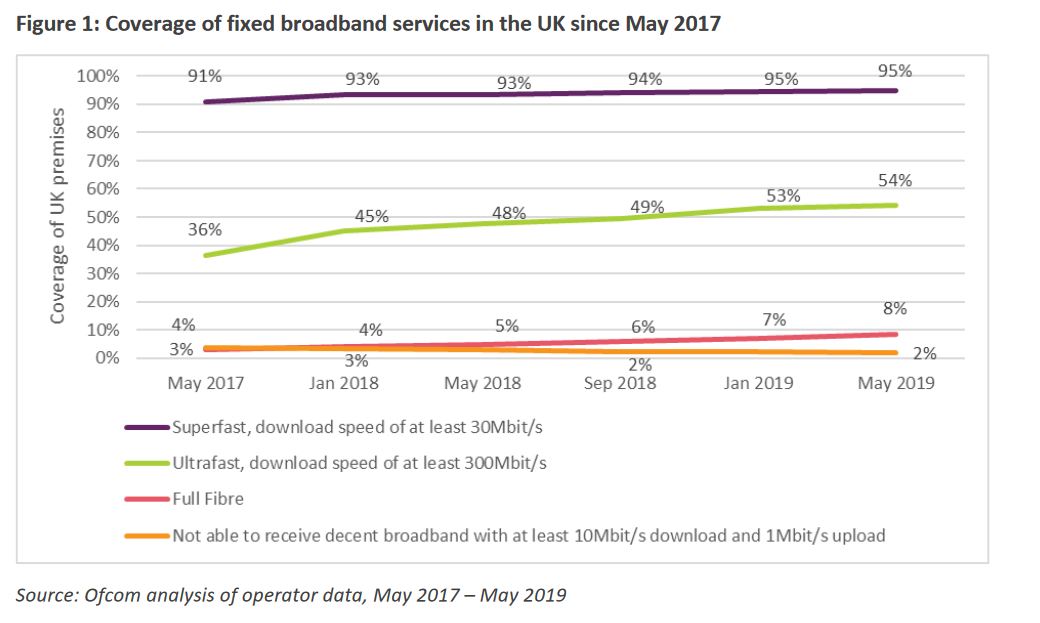 Full-fibre broadband availability has also increased from 7% to 8%, with just under 2.5 million properties now covered. This is an increase of just under 400,000 in the four months since the previous update, with the commercial roll-out of full fibre now being delivered faster than ever in the UK. The report says that there is now growing competition in the full fibre market with a range of larger and smaller full fibre providers rolling out networks in various parts of the country. Ofcom says the increase in availability shows these commercial roll-outs are now building at the fastest ever rate for full fibre in the UK.

The proportion of properties without access to a decent broadband connection (at least 10Mbps) remains at 2% based on current fixed network coverage. Ofcom expects that this figure will fall further when it completes its work to include the coverage of all major fixed wireless networks in its reporting. The report notes that a number of specialist providers use radio technology to deliver broadband services to properties, without using any conventional copper or fibre “wired” connection. Increasingly, it says, the major mobile networks are also offering such fixed wireless access services from their mobile networks. However, people who do not have access to a decent and affordable service at their home or business, and who meet the eligibility criteria, will be able to request such a service under the new broadband Universal Service Obligation (USO). In June 2019, Ofcom published a statement designating BT and KCOM (which services the city of Kingston upon Hull) as the Universal Service Providers for the rest of the UK and Hull areas respectively. From 20 March 2020 people will be able to make a request under the USO by contacting the relevant Universal Service Provider directly.