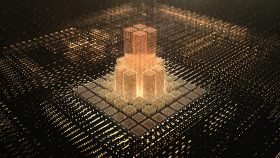 Nokia has set a capacity record during the world’s first field trial of single-carrier terabit-per-second data transmission on a deployed fibre network. The trial successfully transmitted a record 50.8 terabits per second using multiple wavelengths, each with a net information rate of 1.3 terabits per second, over a 93-km fibre route of Etisalat’s wavelength division multiplexing (WDM) network. Leveraging a single optical carrier operating at 100 Gigabaud, the terabit wavelengths employed Nokia Bell Labs-pioneered probabilistic constellation shaping, or PCS, to intelligently shape the signal to achieve maximum capacity for the specific fibre route. Nokia’s Photonic Service Engine 3 (PSE-3), which is currently shipping to customers as part of Nokia’s 1830 portfolio, is the first coherent digital signal processor to implement PCS.

Esmaeel Alhammadi, Senior Vice President, Network Development at Etisalat, said: “We are pleased to have partnered with Nokia Bell Labs to demonstrate that our optical network is capable of transporting a terabit per second over a single wavelength and a total per-fibre capacity of over 50 terabits-per-second. Increasing network capacity helps us to provide bandwidth-hungry services such as 5G extreme mobile broadband, fibre-to-the-home, and DCI for enterprises.”

Sam Bucci, Head of Optical Networking at Nokia, said: “The introduction of 5G will require a network that can support dramatic increases in bandwidth in a dynamic fashion. This ground-

breaking trial with Etisalat is testimony to Nokia’s commitment to continue to invest in coherent and optical component technologies required to meet the 5G networking challenge at the lowest total cost of ownership for our customers.”

The announcement comes as Etisalat is investing heavily in its core network infrastructure in anticipation of the massive increase in traffic from high bandwidth services. Details of the trial are set to be published in a post-deadline paper with the European Conference on Optical Communication.

Nokia launched the PSE-3 chip in 2Q18 and first field-trialled PSE-3 in April of this year with Polish operator Netia.