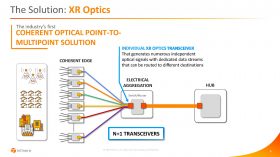 Infinera has launched what could turn out to be a game-changing technology for optical transport network infrastructure. Called XR Optics, Infinera says it is the industry’s first point-to-multipoint coherent optical subcarrier aggregation technology optimised for hub-and-spoke traffic patterns.

Rob Shore, Infinera’s SVP Marketing told Optical Connections, “If you think about the way traffic flows in the network, the vast majority of it is hub and spoke. You have mobile, residential and business users, most of whom are trying to connect to an internet peering point or a datacentre. You have hundreds of thousands of endpoints that are being aggregated and homed in on just a handful of points. However, optical transmission is essentially a point-to-point technology. Since its inception, several years ago, we’ve been using a point-to-point technology to address a point-to-multipoint application, which results in inefficiencies. You end up with far more lasers than necessary in the network because you’re forced to put one laser each side of the fibre for every single end-point in the network.”

Originally developed for long-haul optical communications to provide greater reach and control of the signal to get a higher average speed of transmission, Nyquist subcarrier technology was used for point-to-point connections and appeared in Infinera’s ICE4 Infinite Capacity Engine, a new version of which is expected to be released in 2020. With coherent subcarrier aggregation (CSA) capabilities, XR Optics technology enables a single high-speed transceiver to simultaneously send and receive independent data streams to and from numerous low-speed transceivers. By leveraging these capabilities, Infinera says network operators will be positioned to significantly reduce the number of transceivers in the network, eliminate the need for costly intermediate aggregation devices and more efficiently optimise transport infrastructure for hub-and-spoke end-user traffic flows. The step change in infrastructure design is that data streams carried down a single fibre no longer have to be delivered to a single endpoint, but can be delivered to any number of different end points without the need for intermediate aggregation.

Shore says, “Historically, if you pick 16 destinations, each of which required 100G of connectivity, you would need to put a 100G laser in each of those destinations. Then at the aggregation location there would be a device to manage the traffic. On that device there would have to be 16 additional 100G transceivers. With XR Optics, there only needs to be a single 400G transceiver at the aggregation site, meaning that instead of 32 lasers, only 17 are required and instead of 16 ports, only one is needed.” He added that there are also efficiencies to be had in terms of port management; whereas traditionally there would be ports on one side with a variety of different speeds and on the network side a number of 400G ports, with XR Optics, all ports are 400G and can be allocated for aggregation or networking as required, but there are other advantages. 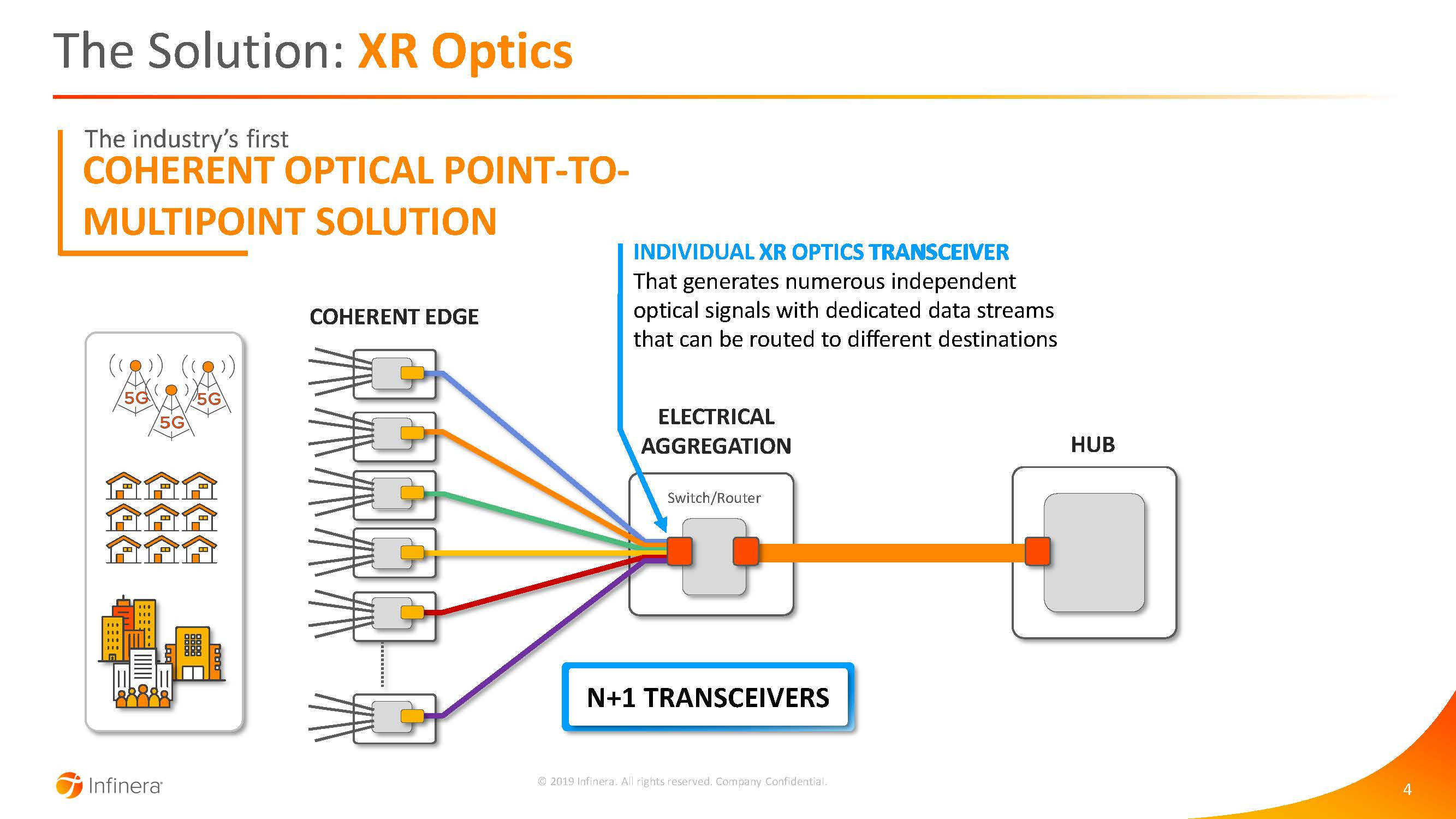 Shore explains, “If for example if you have 1600G transceivers on the edge, normally, you would need the same capacity on the hub side, but what you can now do is put a 400G transceiver in there generating 25G subcarriers which can be sent to different destination, all of which have 100G transceivers. As each end point requires more capacity, you can just provision another subcarrier to it. You can grow the network as required and not have to put it all in on day one.” He added that it would even be possible to keep a number of subcarriers in reserve and allocate them to end points dynamically, as and when extra capacity was required.

He concluded, “The reasons I think the timing is right for this solution is firstly growth. With 5G and fibre deep applications there are greater bandwidth requirements, to the point where the first aggregation points need 100G. An individual cell tower might generate 25G as will a 5G cell tower, and when you aggregate them, you’re going to need 100G on the uplink, and that’s where we see this technology starting, at what we call the coherent edge. The other reason is the development of 400ZR. For many years, low-speed transceivers have been vendor-interoperable. Higher speed optics require DSP’s and coherent-based transmission, and once you get to that level, everything becomes proprietary. So the OIF got together to build a small, pluggable 400G laser and agreed on how it transmits, so that everyone’s will work together.”

Shore added that while the commoditising of 400G pluggables is essentially a good thing for the industry, the downside is that it tends to lead to least common denominator performance. While this means a multi-sourceable QSFP-DD form factor 400G ZR laser will be available for short-reach, point-to-point applications, especially between datacentres, it has virtually no applicability for aggregation networks. He said, “What it is doing however, is creating an entirely new class of routers that are built around 400G QSFP-DD interfaces, which will be deployed in large numbers over the next few years, and XR Optics, which is aggregation optimised, can leverage all of those. It is generating 16 25G subcarriers that can be sent to different destinations, but to the router, it’s just a 400G interface.”

He stressed however that the company didn’t want XR Optics to be seen as an Infinera product. “What we want,” he said, “is not for this to be an Infinera product. We want this to be seen as an industry methodology applicable to aggregation networks. We’re trying to create an ecosystem of partnerships with component and system manufacturers that will use this technology to build parts. Of course, the underlying technology will be Infinera. We’ll license it and companies can build products off of it which conform to industry standards and can plug in to any device. XR Optics is designed to be integrated into a variety of form factors, including industry-standard pluggables, from low-speed interfaces with a single subcarrier to high-speed interfaces with numerous subcarriers.”

Early reactions to the announcement from the industry are positive. Andrew Schmitt, directing analyst, Cignal AI says, “Developing 400ZR solutions demands a large investment, and companies are looking for ways to leverage these investments by broadening their addressable market. Infinera has gone a step further in a big, bold move: it is combining its unique expertise in photonics, silicon, and network management to yet again create a truly differentiated approach to solve the engineering challenges faced by network operators.”

In a similar vein, Christophe Metivier, VP of manufacturing and platform engineering, Arista Networks comments, “Optical aggregation with XR optics is a compelling new architecture for aggregating edge nodes such as 5G radios into high-speed 400G router ports without requiring active aggregation devices in the field. We welcome this multi-vendor effort to fundamentally reduce the complexity and operational cost of aggregation networks.”

Every once in a very rare while, a technology comes along that feels like a game-changer and XR Optics does seem to fall into that category. The promise of a big reduction in CapEx and OpEx resulting from the need for far fewer transceivers, fewer intermediate aggregation devices, less space and power requirements and the ability to respond quickly to growing demands for bandwidth and changing traffic patterns, is just what the industry needs right now as it looks to maximise the potential of optical communications networks.