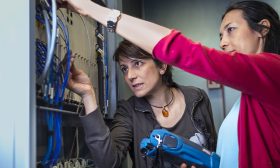 Telecom Italia has signed a non-disclosure agreement with state lender CDP and the utility firm Enel to begin talks on ways of integrating its fibre optic network with smaller rival Open Fiber. The talks will include a possible merger between the two fibre providers.

“In relation to continuous press rumours,” said TIM, “the company confirms that it has signed a non-disclosure agreement (NDA) with Cassa Depositi e Prestiti (CDP) and Enel aimed at starting discussions to evaluate possible forms of integration between TIM’s and Open Fiber’s fibre optic networks, including corporate operations.”

It went on, “The objective of the discussions is to verify the feasibility of such an operation, the related procedures and the perimeter of activity subject to a possible agreement, based on the will of the parties and on the legislative and regulatory frameworks.”

The Italian government favours creating a single major ultrafast broadband operator by merging TIM’s network with Open Fiber’s, which would avoid a duplication of investments as part of the country’s move to a wider fibre footprint for both consumers and businesses.

CDP jointly owns Open Fiber alongside state-controlled Enel, and has built a stake of just under 10% in TIM to become the second-biggest shareholder in the Italian incumbent after France’s Vivendi.

The future development of TIM’s network has become a bone of contention between the French media giant and the activist investment fund Elliott, which last year seized control of the group’s board.

Open Fiber was set up by Enel in 2016 and is a fibre-only infrastructure company, while TIM’s network is made up of fibre and traditional copper wire.

Last month, Fastweb and Open Fiber signed an agreement under which Fastweb will be able to use FTTH connections across Italy built by Open Fiber in areas not covered by its proprietary infrastructure. The deal includes FTTH access in 80 Italian cities. Open Fiber in turn may purchase wholesale use of the Fastweb fibre infrastructure needed for its network.

Elisabetta Ripa, CEO of Open Fiber, said at the time, “This strategic agreement with Fastweb further expands Open Fiber’s portfolio of commercial partnerships, demonstrating the validity of the wholesale-only model to provide access to all operators on equal terms.”