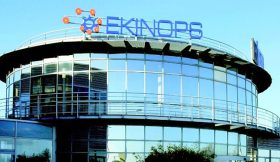 Ekinops, a supplier of telecommunications solutions for telecom operators, has completed the acquisition of the OTN-Switch (Optical Transport Network) platform developed by Padtec, an optical communications system manufacturer based in Brazil.

OTN technology is used to switch data traffic over optical fibres, significantly optimizing network bandwidth utilization. The OTN technology will allow Ekinops to meet growing market demand for this type of technology. It is estimated that over 40% of the optical network market uses OTN solutions.

This strategic acquisition will enable the Group to become a leader in this field and deliver additional revenue from new OTN products starting in 2020. By offering a global OTN/DWDM solution for optical networks product line, Ekinops will be able to target the major operator core networks market segment with the objective to triple its optical transport product sales within 5 years.

Ekinops has acquired the advanced OTN technology and an R&D team comprising 25 engineers based in Campinas, near Sao Paulo (Brazil) for €10 million in cash. Brazilian operations are overseen by Jean-Luc Pamart, co-founder of Ekinops and VP of R&D for optical transport.

Ekinops is a leading provider of open and fully interoperable layer 1, 2 and 3 solutions to service providers around the world. Our programmable and highly scalable solutions enable the fast, flexible and cost-effective deployment of new services for both high-speed, high-capacity optical transport as well as virtualization-enabled managed enterprise services.

The intention to acquire Padtec’s OTN platform was first announced in June 2019.


In Q2 2019, Ekinops posted consolidated revenue of €24.3 million, up 4% (+2% at constant exchange rates) compared to Q2 2018 (no change in consolidation scope between the two periods), which had previously been the busiest quarter in terms of business activity.

With sequential growth of 17% compared to the first quarter of the year, the second quarter of 2019 marked a new peak in activity for the group.

Across the whole first half of the year, revenue amounted to €45.0 million, compared to €42.1 million the year before, i.e. an increase of 7% (+5% at constant exchange rates). The level of activity led to sequential half-year growth of 7% compared to the second half of 2018, traditionally the period with greater business volumes.

The half-year period was marked by growing interest among the key accounts in NFV (Network Functions Virtualization) solutions, major projects for voice router migration to all IP in Europe, the success of new OneOS6 customer roll-outs and significant growth in 200Gb/s optical transport products.

Expected improvement in operating margins in the first half of 2019

Despite a significant base effect in the first half of the year, Ekinops maintained its growth dynamic, particularly internationally. Buoyed by this strong level of activity, a gross margin that remains solid and a controlled cost structure, the H1 2019 results, published after trading on 25 September 2019, should show an improvement in EBITDA margin compared to the first half of 2018 ( EBITDA margin of 9.5% in H1 2018).