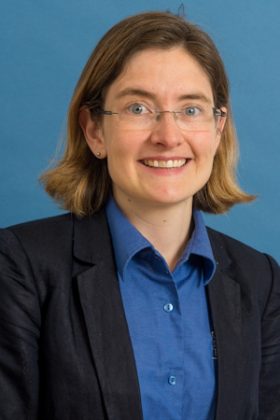 A new project to scale-up novel compound semiconductor device fabrication processes has received European funding through the Avenues of Commercialisation for Nano and Micro Technologies (ACNM) initiative. The project, which should result in a number of new fabrication processes being developed, will be a collaboration between Swansea University, Compound Semiconductor Centre (CSC) and Blantyre, Scotland-based CST Global.

Susannah Heck, principal device development engineer at CST Global and responsible for the project (pictured) explains, “The first fabrication process under consideration is a low cost, high specification, semiconductor laser chip manufacturing platform utilising Substrate Conformal Imprint Lithography (SCIL), initially developed at the Centre for NanoHealth (CNH). An Innovative UK-funded project has already demonstrated that a SCIL- based, Distributed Feedback (DFB) laser manufacturing platform can deliver a 30% cost reduction, with no loss of performance. ACNM funding will enable commercialization of the SCIL-based process, including increasing on-wafer yield and facilitating its move from a 3” to a 4” epitaxial wafer platform. These lasers would typically be used in high-volume markets such as Fibre-to-the-Premises (FTTP), high capacity, optical communication links in data-centres and as coherent sources for trace gas sensing.

Heck adds, “The second fabrication process being addressed aims to develop a high volume, chip-scale packaging concept for the integration of compound semiconductor devices on flexible substrates. Printed, conductive track processes, developed at The Welsh Centre for Printing and Coating (WCPC), will be used to deliver wire-bond free, conformal interconnects in Gallium Arsenide (GaAs) devices. These devices are used for a broad range of applications, from the integration of GaAs sensors in the high pressure (50MPa), SMART gaskets used in critical pipework joints, through to the low-cost assembly of LEDs in flexible, wearable products for the cosmetic and healthcare markets. They are also in flexible, large area, LED displays.”

CST Global says that although the ACNM funding is minimal, each process successfully scaled-up should attract further investment for greater commercialization in future.