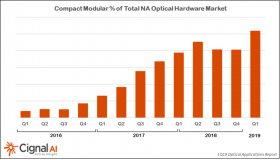 Compact modular optical hardware is being used in more network applications than ever before, driving up sales to over US$275 million in Q1 2019, with the market potentially worth US$1 billion for the whole year. These figures were reported in the latest Optical Applications Report from market research firm Cignal AI.

The Q1 2019 report illustrates significant growth throughout most regions, as the compact modular customer base expanded beyond cloud and webscale operators to include traditional telco customers utilising compact modular to enable disaggregation.

Growth was most pronounced in North America in that quarter, where it accounted for almost 30% of the entire optical market and is expected to continue advancing through 2023.

“Network applications for the compact modular form factor have expanded well beyond the original data centre interconnect deployments,” said Scott Wilkinson, Lead Analyst for Optical Hardware at Cignal AI. “Applications now include traditional telco networks, metro and long haul deployments, and even some early trials for subsea deployment. We expect this spending trend to increase in 2019 as new compact modular products come to market from a variety of vendors.”

* NB Earlier this month it was announced that Cisco and Acacia Communications had entered into a definitive agreement under which Cisco has agreed to acquire Acacia for a consideration of US$2.6 billion.